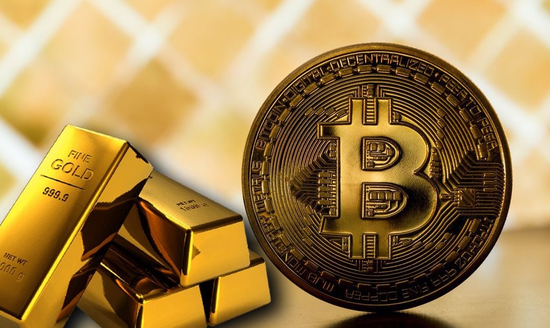 Bitcoin Has Actually Only Taken 2% Of Gold Market Cap, According to Bitcoin’s Realized Cap

As Bitcoin grew in price towards the end of 2020 and hit all-time highs of $42,000 last week, a narrative appeared that investors were swapping gold for BTC and that Bitcoin had thus taken around 7% of the precious metal’s market cap of $10 trillion. Using realized cap, which calculates market cap in a different, more precise manner, the real “theft” from gold actually stands at 2%, says Ki. 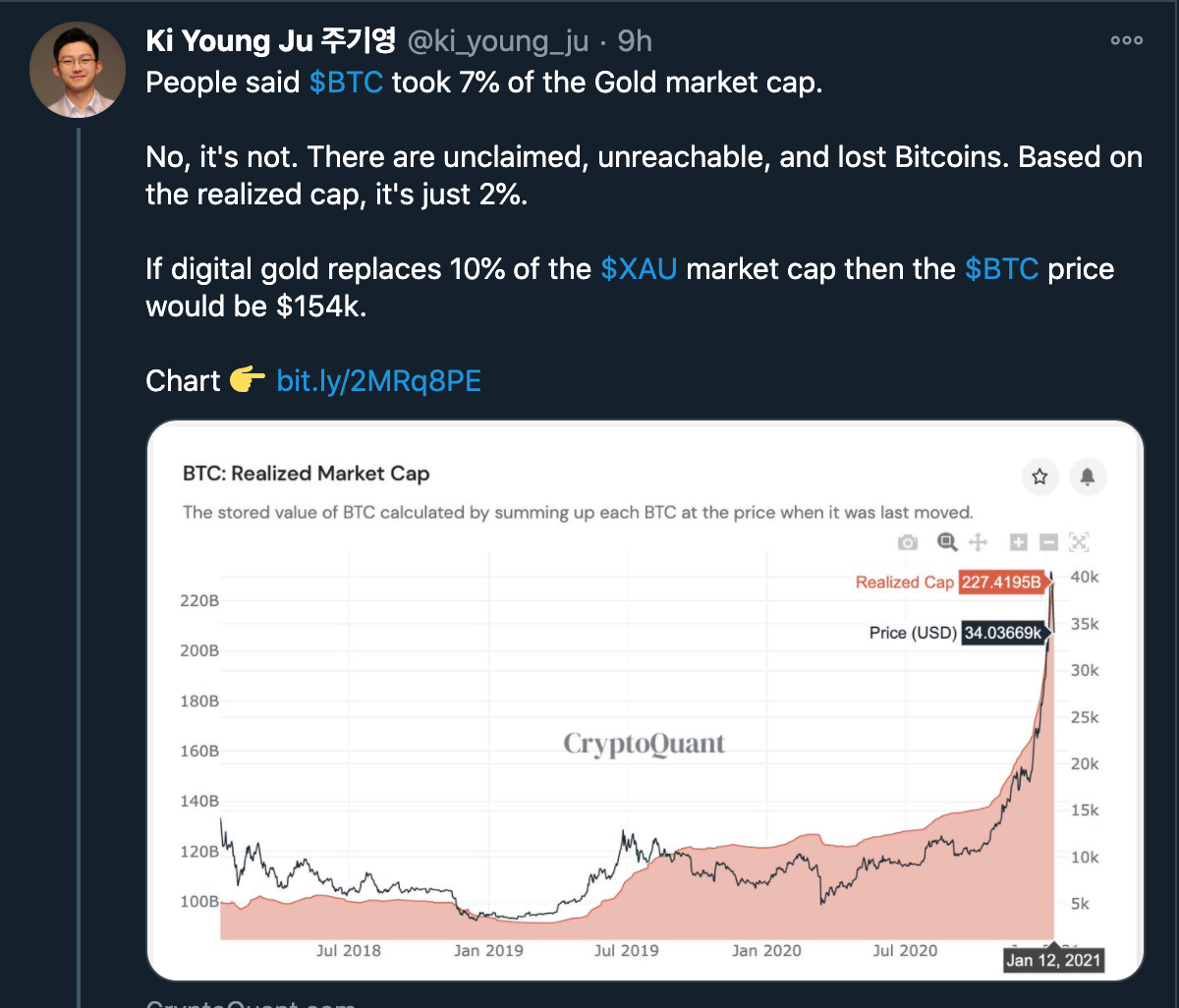 “People said $BTC took 7% of the Gold market cap. No, it's not. There are unclaimed, unreachable, and lost Bitcoins. Based on the realized cap, it's just 2%,” he tweeted alongside a realized cap chart, “If digital gold replaces 10% of the $XAU market cap then the $BTC price would be $154k.”

By design, there is no Depository Trust and Clearing Corporation which keeps track of everyone’s stock certificates. So, when tokens or virtual coins get lost, they stay lost. In Bitcoin, this means that roughly 15% of supply is assumed to be permanently lost and out of circulation. Market Cap does not consider these nuances, instead of aggregating the value of all coins ever mined and assessing them at the last market price.

The realized cap attempts to improve on the market cap by trying to discount coins that might be lost. Its crux is to value different part of the supplies at different prices, instead of using the daily close as the market cap does. After the calculation, Bitcoin’s realized cap stood at $227 billion on Wednesday, while its standard market cap was $645 billion. 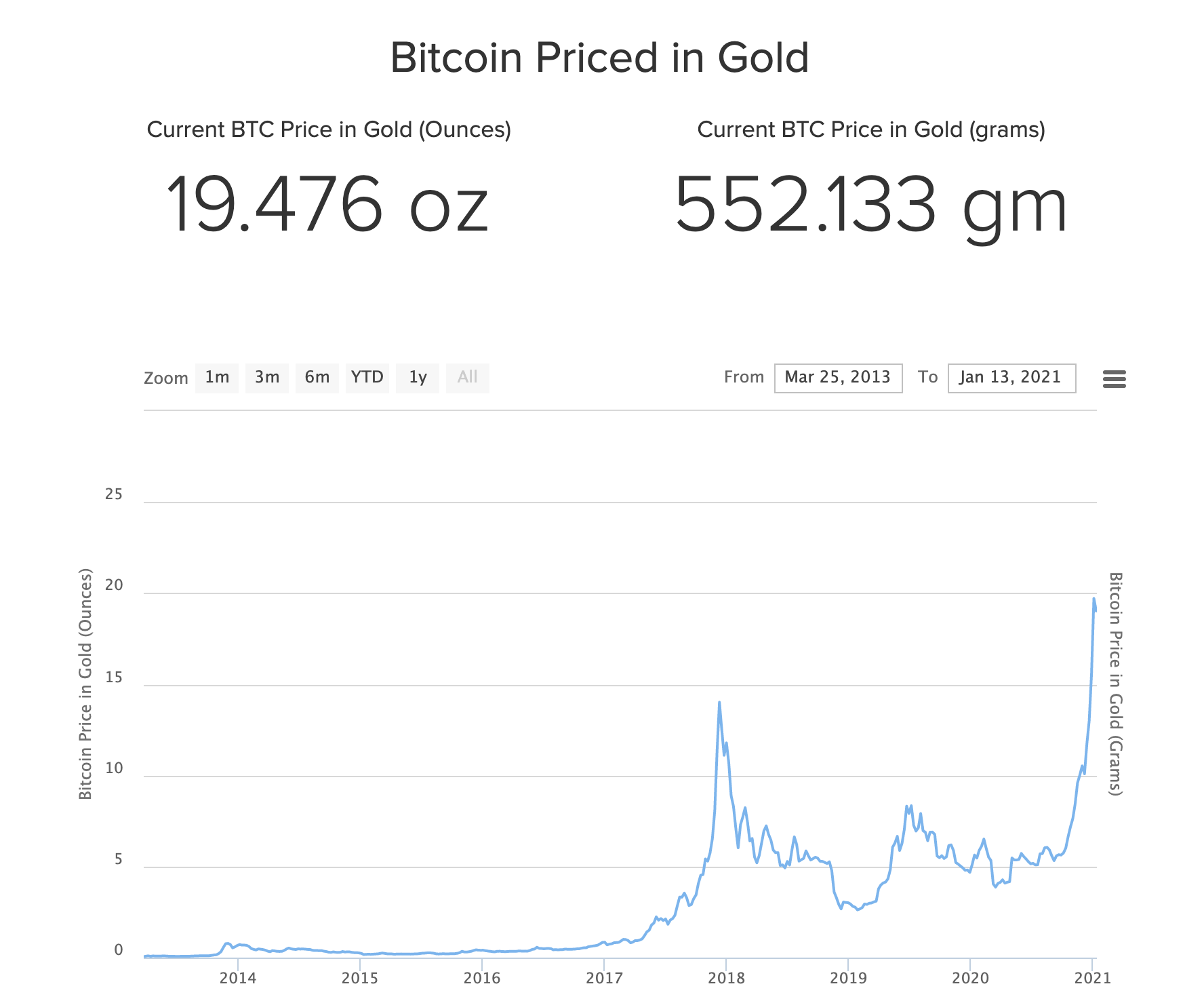 Despite its arguably slower progress, Bitcoin is still faring extremely well against gold, which failed to recoup its losses in BTC terms even as BTC/USD dropped to near $30,000 on Monday. Bitcoin bought 19.476 ounces of the precious metal at publishing time, according to data from Buy Bitcoin Worldwide.

According to Coin Metrics, Bitcoin’s correlation to gold was trending towards zero this week, down markedly from highs seen in October. Previously, commentators noted that Bitcoin has already transferred all of gold’s $10 trillion market cap in its 12-year history. However, criticism from gold fans remains, with gold bug Peter Schiff casting doubt on both Bitcoin’s status as a safe haven and institutional investors’ interest in it.

“Bitcoin traded near $42K on Friday and near $30K on Monday. An asset that drops 28% over a weekend is not a safe-haven, a store of value, or a viable hedge against #inflation,” he tweeted this week.

Last: Bitcoin Buy Orders May Be Limited This Weekend If Trading Spikes, eToro Tells Customers
Next: Japan's Securities Regulator States That XRP Is Not A Security