What is Binance Coin and Why is it Up 800% Since January?

Summary: As Cryptocurrencies and DeFi continues to boom, the main DeFi platform, Ethereum, has seen tremendous increases in fees, making the network almost unusable. In response, users have begun moving to rival platforms, such as the Binance Smart Chain, which offers high fees and low transactions, and is challenging Ethereum’s position as the DeFi king. Binance ...

As Cryptocurrencies and DeFi continues to boom, the main DeFi platform, Ethereum, has seen tremendous increases in fees, making the network almost unusable. In response, users have begun moving to rival platforms, such as the Binance Smart Chain, which offers high fees and low transactions, and is challenging Ethereum’s position as the DeFi king. 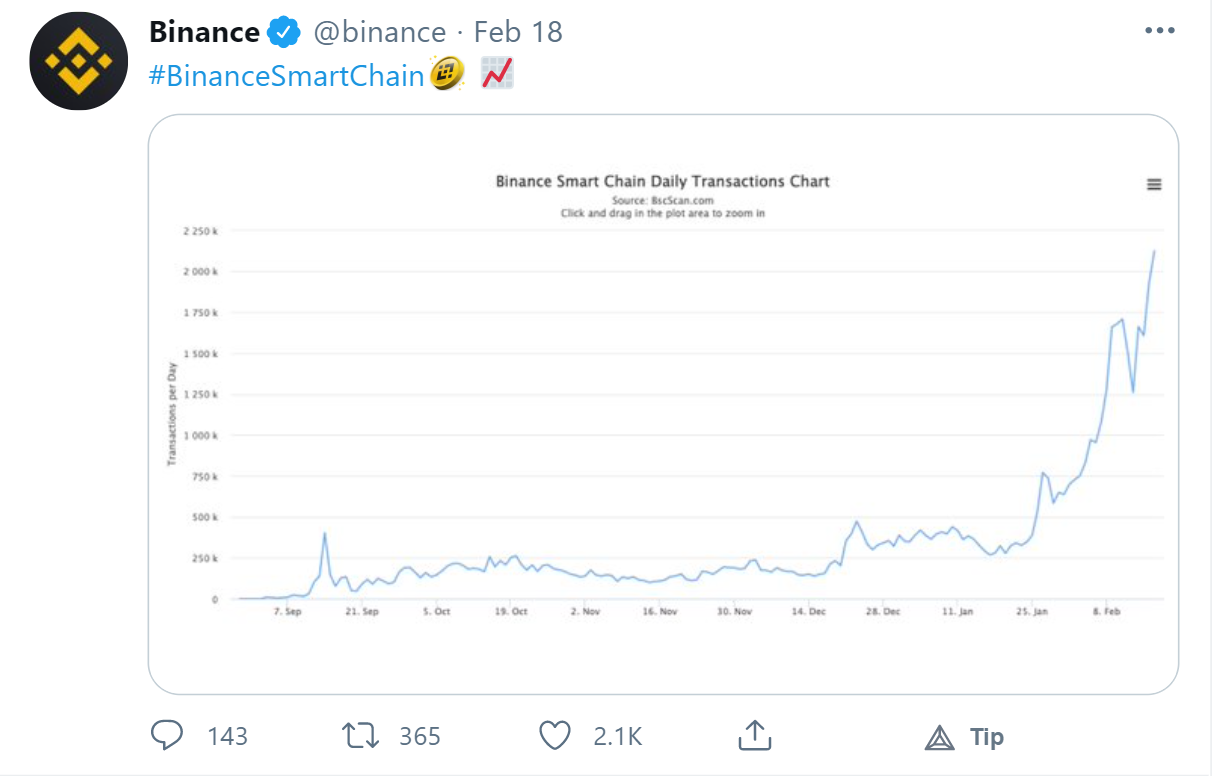 Binance Coin, BNB, was created in 2017 by the centralized exchange Binance. Initially, they held an ICO for the ERC20 token. At release, its main use was to decrease fees on Binance by 25%, but the utility of the token quickly grew.

Each quarter, Binance, the world’s largest exchange, dedicates 20% of their profits to buying back and burning the BNB token. In economic terms, this means that the token has the same demand with a lower supply, so it leads to an increase in the price of the token, and directly correlates the success of Binance as an exchange to the success of the Binance Coin. This program will continue until 50% of the total supply is burned. 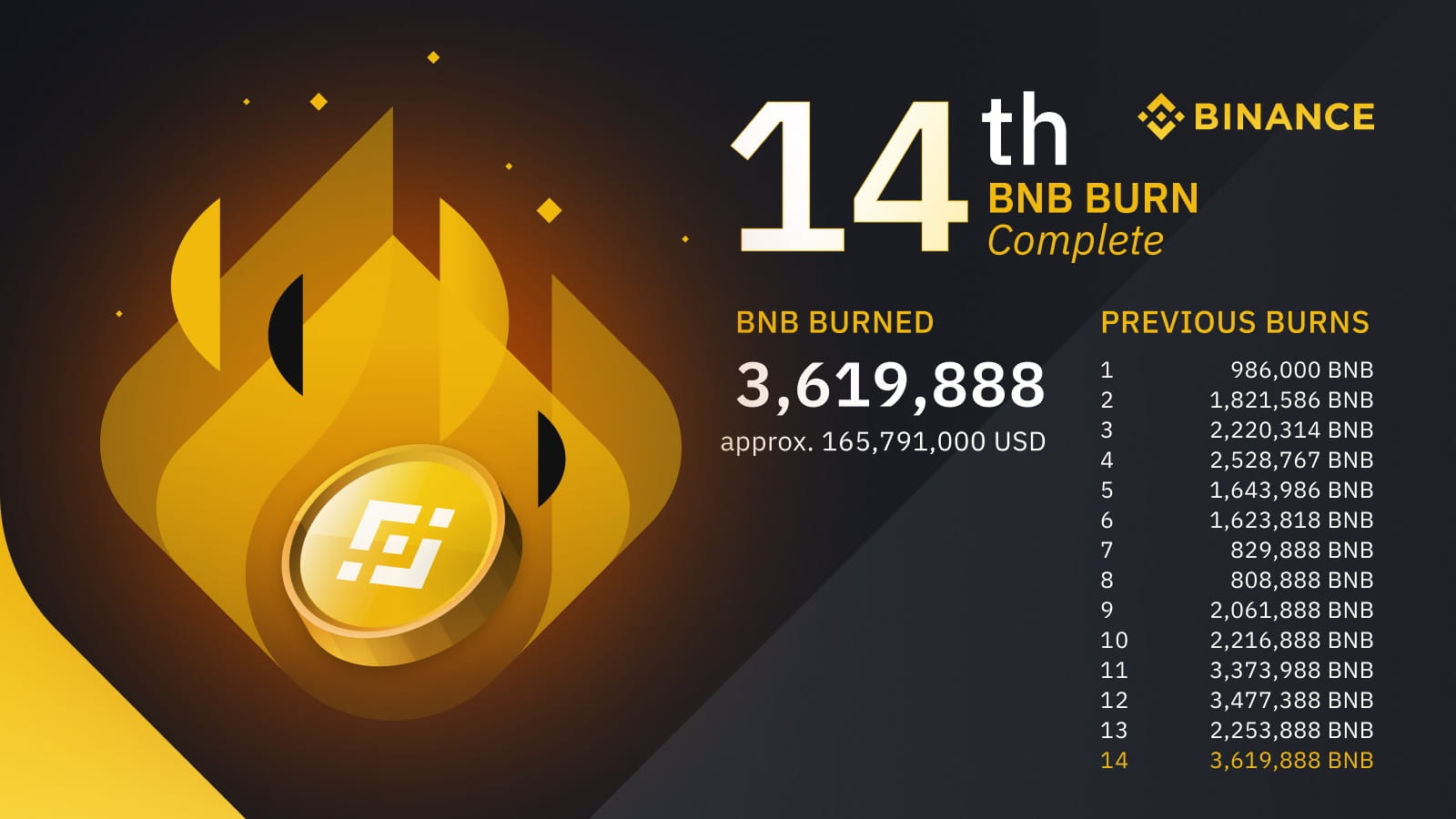 Furthermore, the Binance token is used for Binance’s IEOs, or Initial Exchange Offerings. These events are similar to ICOs, where a new token is offered to the public for the first time, but instead of being available to everyone, the tokens are available only on the Binance exchange, and users can buy these new tokens only using BNB. Some notable tokens which have had Binance IEOs include Band Protocol, Kava, and Matic Network. For the BNB token, this has a similar effect to what Ethereum experienced during the ICO craze of 2017: Users buy as much BNB as possible in order to buy these tokens, thus indirectly driving up the price of BNB.

In April 2019, Binance released their decentralized exchange on Binance Chain, a blockchain based around the BNB token, and migrated from their ERC20 token to their native blockchain. This exchange allows for users to trade a plethora of assets, such as ETH, BTC, and many other cryptocurrencies, in a decentralized and regulation-free manner. On this blockchain, the BNB token pays a similar role as ETH does on the Ethereum blockchain: The means for paying transaction fees and as the “anchor” asset of the network.

Without a doubt, the most significant driver of the BNB price was the release of the Binance Smart Chain in September 2020. This blockchain allows for the creation of smart contracts and dApps, making the token a competitor to Ethereum. It is built on top of the Tendermint and Cosmos SDK. This means that, like Cosmos, the Binance Smart Chain supports fast and cheap transactions, as well as offering staking rewards for the BNB token.

One of the biggest problems for blockchains wanting to compete with Ethereum is that Etheruem has a massive first-mover advantage, and already has the majority of DeFi projects building on its platform. To combat this problem, the Binance Smart Chain has made itself Ethereum Virtual Machine-compatible, meaning that Ethereum dApps can easily transfer their projects to this blockchain.

Binance is also leveraging their numerous partnerships within the cryptocurrency sector to advance their blockchain, and have announced collaborations with the likes of Chainlink, Band Protocol, Aave, and Ontology. They also have created an accelerator program to incentivize new projects to build in their ecosystem.

As one could imagine, with the ever-increasing Ethereum fees bloating the network, Binance Smart Chain and BNB appear to be an enticing alternative. This narrative has been furthered by the fact that PancakeSwap, Binance Smart Chain’s Uniswap competitor, reached a billion-dollar market cap on February 18th, and surpassed Uniswap’s daily volume on February 19th. Both of these events have sent the BNB price booming, and Binance Coin is now the third largest cryptocurrency by market cap. 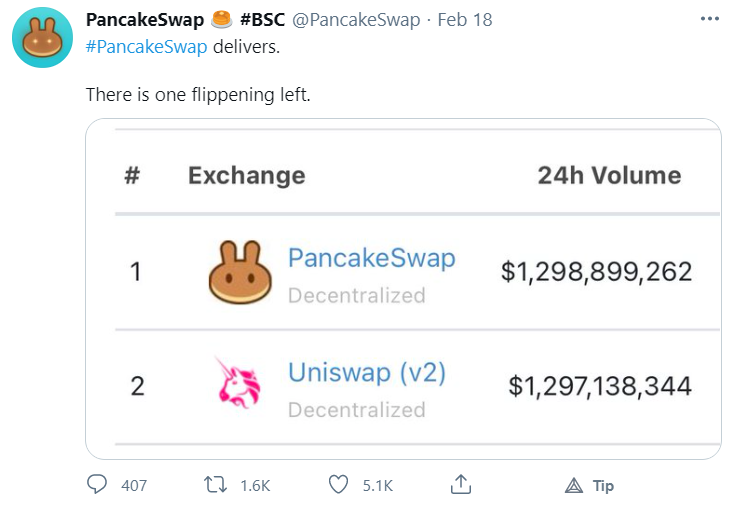 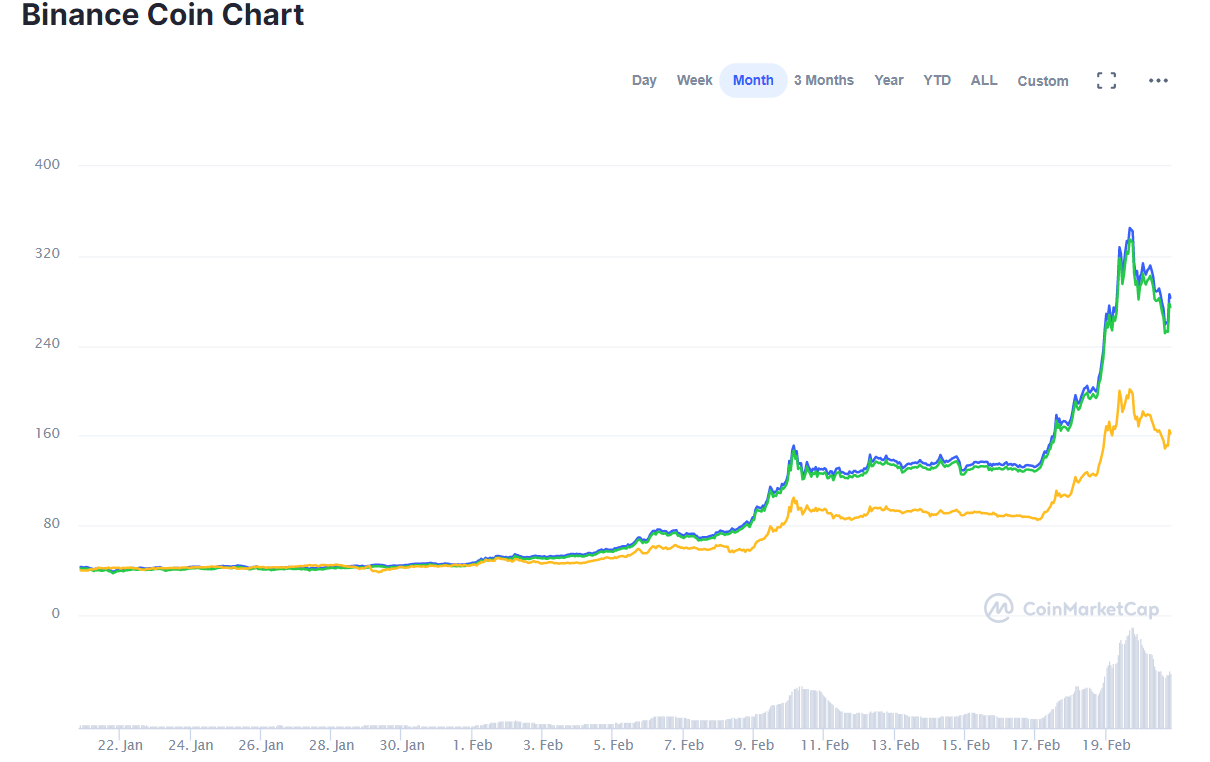 Even though it appears like Ethereum’s days are numbered, the smart contract king still has a chance to keep its throne. Some controversy surrounding the Binance blockchain has to do with its centralization. There are only 21 validators on the network responsible for securing and validating transactions, compared to over ten thousand on Ethereum. With 21 entities controlling the fate of a $40 billion dollar blockchain ecosystem, there is some concern that an unforeseen event could occur that may result in double-spending or some other problem due to the lack of decentralization. Additionally, the BNB token has not yet been declared “not a security” by regulatory agencies like the Securities and Exchange Commission, meaning that there is a chance that the token could be declared an unregistered security, like what happened with XRP earlier this year. Ethereum, on the other hand, has been declared decentralized enough to not be a security, according to the SEC.

For the time being, Ethereum continues to be the smart contract king, even if the network is barely usable in its current state. But, if Ethereum’s Layer 2 Scaling solutions help to alleviate the congestion on the network, it just may be able to keep its place at the top. On the other hand, the Binance Smart Chain is proving to be a viable competitor, and it has a legitimate chance of challenging Ethereum’s dominance, as it has already shown over the past couple of weeks. Nevertheless, in the rapidly-developing world of cryptocurrencies and blockchain technology, nothing is certain, and the true smart contract king may have yet to be created.

Last Update:
Tags: Binance,Binance Chain,Binance Smart Chain,Ethereum,Smart Contract
Link: What is Binance Coin and Why is it Up 800% Since January?   [Copy]