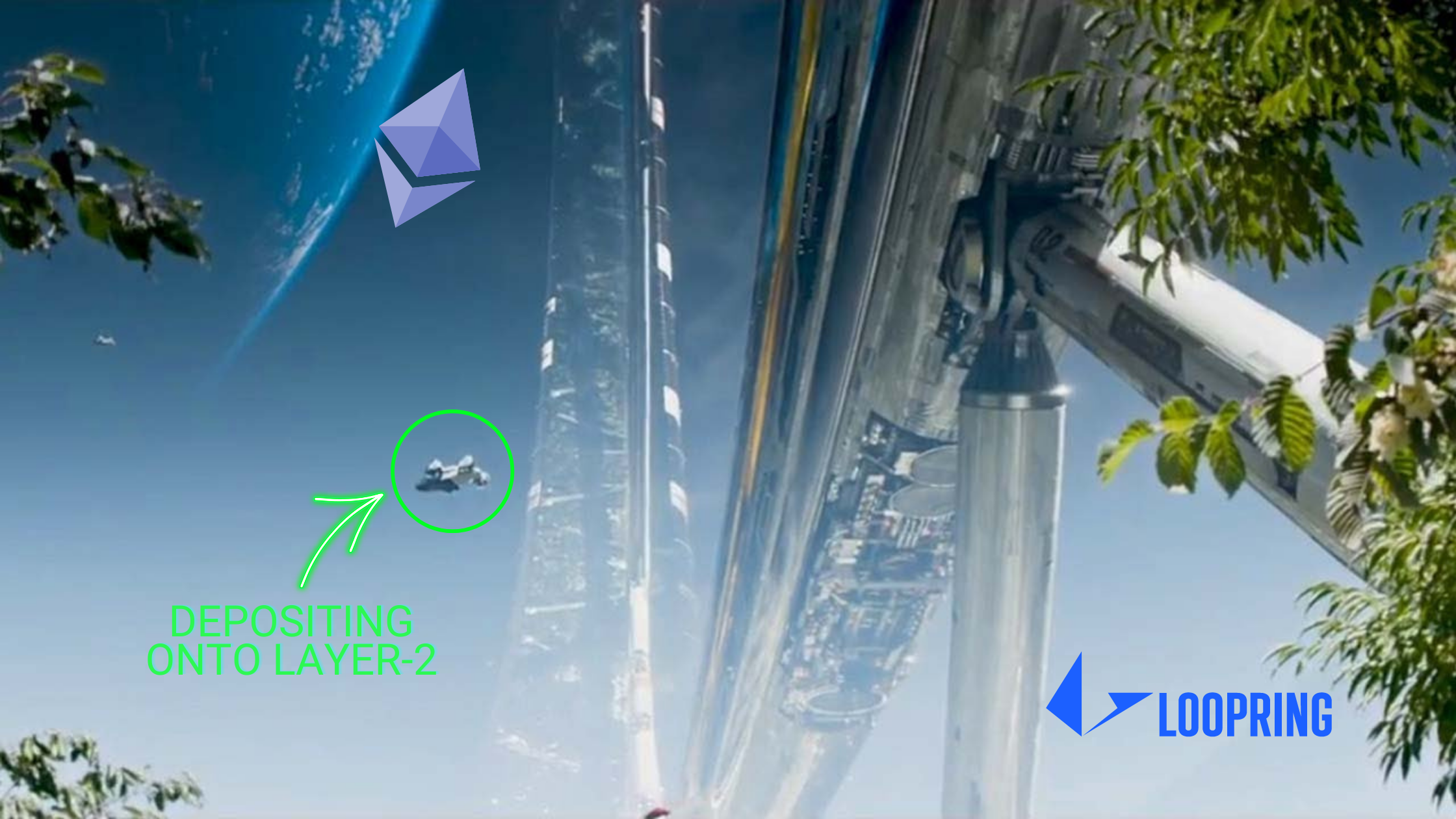 [Press Releases]Loopring: Welcome to the Future

Summary: The year is 2030 — Earth (Ethereum)’s population has now been completely migrated off planet (Layer-2), with Earth becoming exclusively the security for these new colonies (the Global Settlement Layer). In 2021, populations on Earth were becoming too large. It was overcrowded and becoming more-and-more uninhabitable due to environmental sustainability concerns, so low-Earth-orbit Stations (Layer-2s) began ...

The year is 2030 — Earth (Ethereum)’s population has now been completely migrated off planet (Layer-2), with Earth becoming exclusively the security for these new colonies (the Global Settlement Layer).

In 2021, populations on Earth were becoming too large. It was overcrowded and becoming more-and-more uninhabitable due to environmental sustainability concerns, so low-Earth-orbit Stations (Layer-2s) began to emerge.

These new Utopia Stations (like Loopring Station) rekindled hope for the future.

They were secured in Earth’s orbit using Earth’s gravity. This way, if anything should ever happen to these new Utopia Stations, one could easily fall back to the security of Earth using its gravity through escape pods (force withdrawals back to L1).

Early on, people attempted to live part-time between these Stations and Earth, but this just proved to be too costly. Ship transfers to and from Earth (deposits + withdrawals) were just too expensive (so much fuel!). These new Utopias needed to become full-time, all-encompassing new homes. 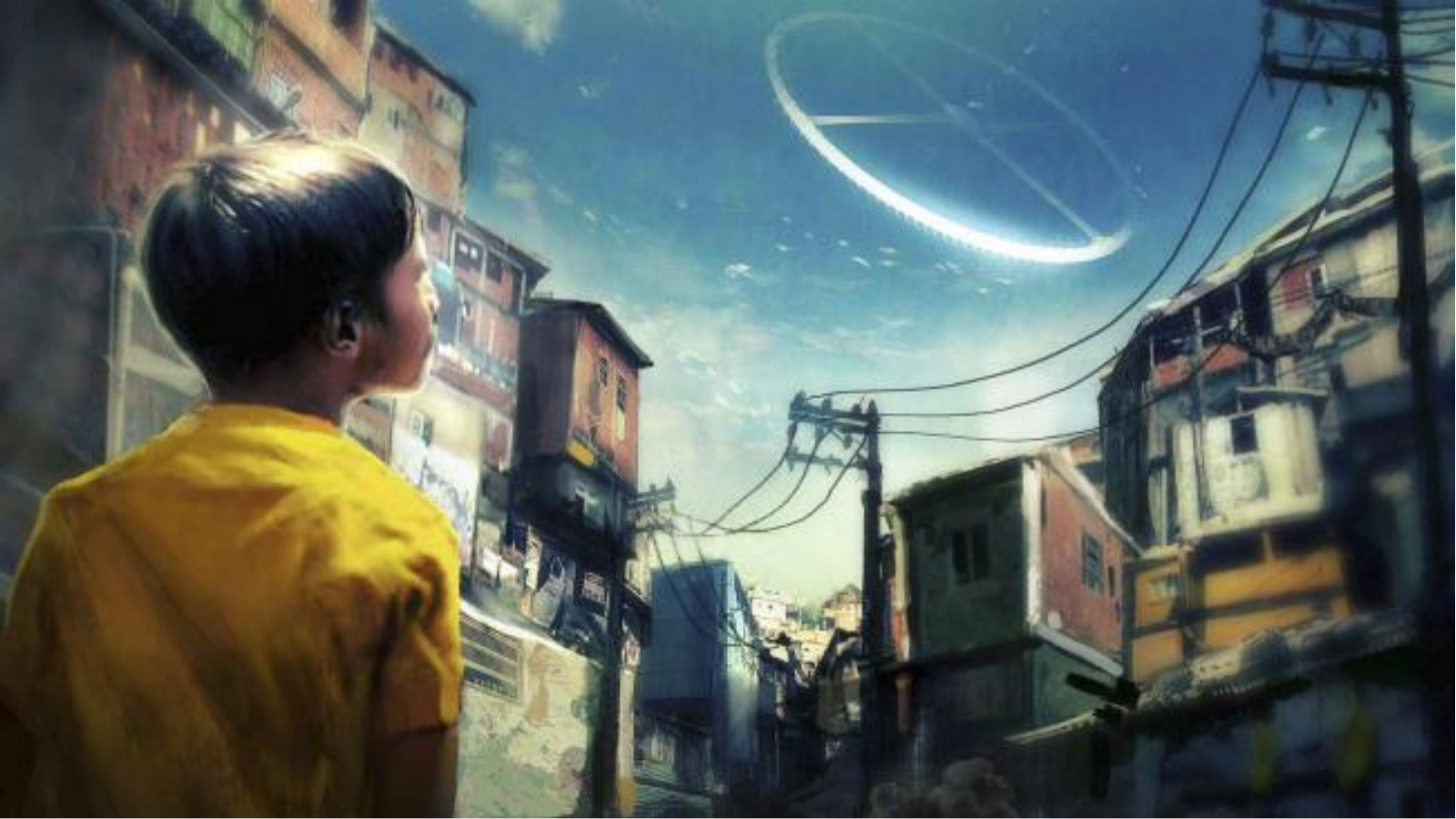 Due to the exponential growth of the human population (Ethereans) and subsequent demand, a few Utopia Stations were built (other Layer-2s) across low-Earth-orbit.

Just like Earth had numerous countries with different cultures and values, these Utopia Stations evolved in a similar way. People chose to reside mainly on one or the other, as a home-base, depending on their personal preferences, cultures or values.

By 2030, Earth had migrated completely off planet and everyone lived in harmony on their new space homes, travelling freely between.

Okay — analogies are great, but back to reality — Here’s a complete guide to Loopring and some insight into how we are building this future, today. 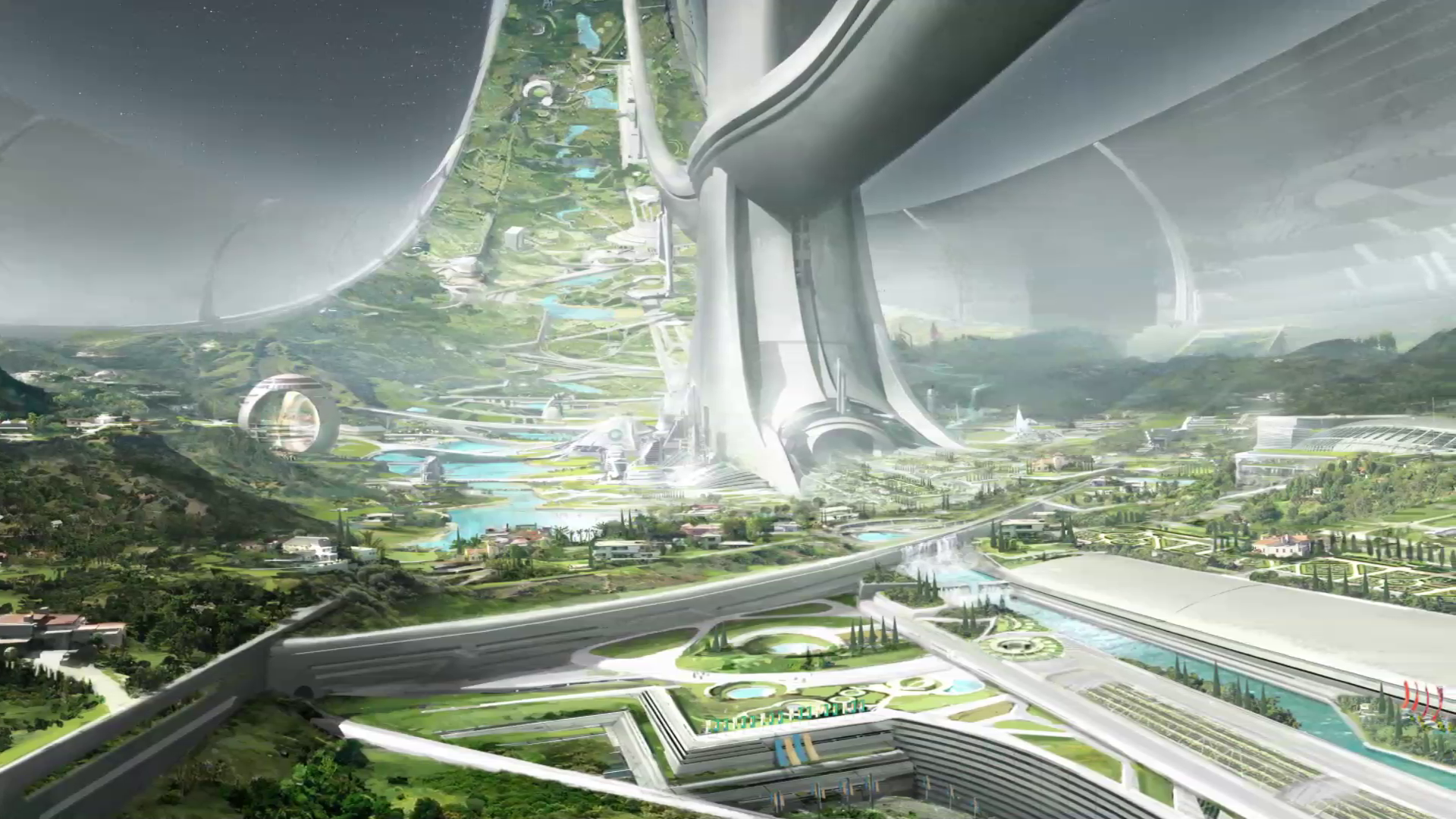 What exactly is Loopring Layer 2

In a future where physical banks are no longer needed, thanks to the advances of blockchain technology, Loopring is harnessing this technology to build an all-in-one digital bank of the future.

Loopring aims to be the home-base for millions of people around the globe to securely self-custody their funds, while simultaneously having access to the entire stack of what the crypto universe has to offer.

All-in-one, trustless, self-custodial banking in your pocket — for the masses.

In the crypto space, a good parallel for Loopring is a Binance / Coinbase ecosystem, but completely trustless and self-custodial. A CEX (centralized exchange) experience (near instant transactions + cheap fees) but without having to trust anyone else with your funds.

To accomplish this future, we have taken on the ambitious approach of building the entire technology stack ourselves. A complete, vertically integrated approach that is truly unique in the crypto space. 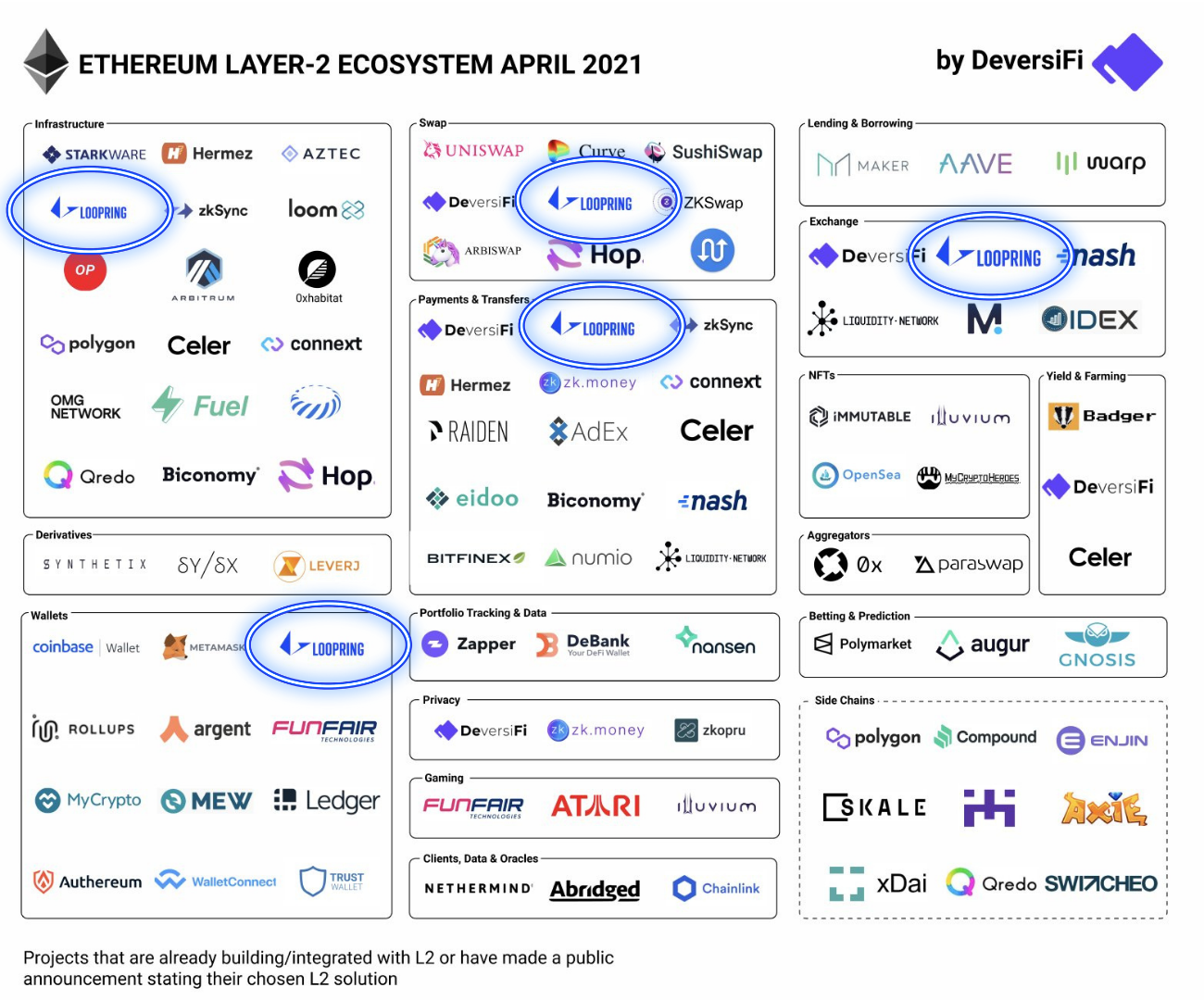 First, we built an incredibly powerful zkRollup (Layer-2) on top of Ethereum to power it all.

zkRollups use incredibly advanced zero-knowledge proof technology while binding itself directly to Ethereum as its security base-layer.

Our zkRollup is extremely secure and only relies on math (not game-theory like other rollups) along with the base-layer security of Ethereum + Ethereum validators.

We strongly believe that this is the most future-proof technology out there, which is why we chose it as the base for our infrastructure that would power everything else on top of it.

You can read more on why Vitalik (creator of Ethereum) also believes zkRollups are the future here.

Unlike other Rollups (like Starkware, zkSync or Optimism), we built ours to solely run our applications and to build-out our ecosystem… not to be (general purpose) infrastructure for other peoples apps to run on.

Next, we built out the Loopring Layer 2 DEX (Decentralized Exchange) that is powered by the zkRollup infrastructure.

This is the application layer of Loopring, and where millions of users can interact with DeFi (decentralized finance) and the entire crypto universe.

This is where you can swap, orderbook trade, farm +earn (all gas-free!) — with nearly instant transactions that are up to 1000x cheaper than the same actions on Ethereum L1 — without compromising on your security thanks to the magic of zkRollups. 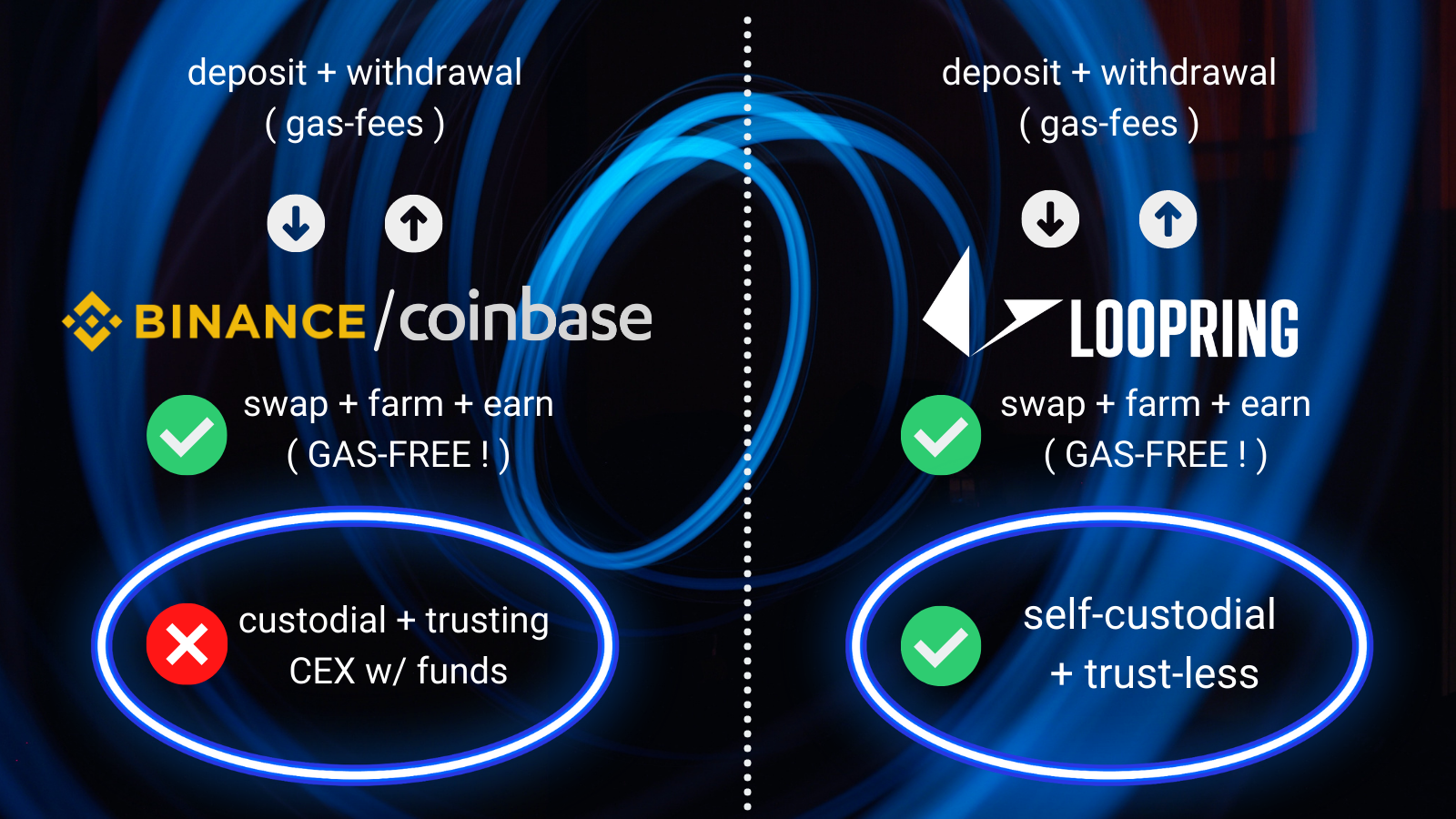 Here are the important points :

All-in-all there is no better security for your funds and this will enable us to securely onboard the masses into crypto.

The Loopring Smart Wallet also comes with Loopring Layer 2 Exchange (and all of its functionality) already integrated — the only crypto wallet with native, Layer-2 enabled gas-less transactions!

With a lot more upgrades and functionality coming soon (like EthPort + a fresh new look!) it really is the last and only wallet you will ever need.

For an in-depth tutorial on how to install + setup the mobile wallet — click here.