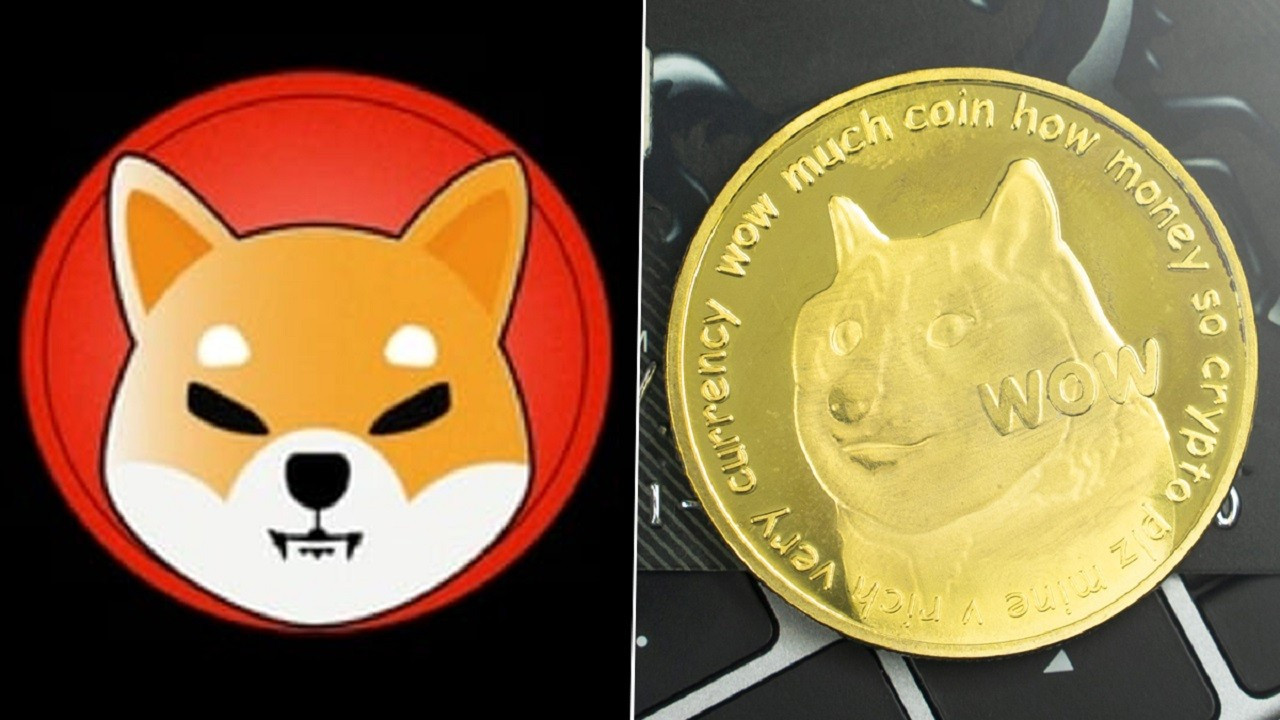 Dogecoin versus Shiba Inu: Which Memecoin is the Better Investment?

Summary: Meme investing has taken over the retail trading scene. Stocks such as AMC and GameStop are up thousands of percentage points on the year, and this type of hype and meme-fueled investing has made its way into the cryptocurrency space. The two biggest memecoins are Dogecoin and Shiba Inu, and while both are far from ...

Meme investing has taken over the retail trading scene. Stocks such as AMC and GameStop are up thousands of percentage points on the year, and this type of hype and meme-fueled investing has made its way into the cryptocurrency space. The two biggest memecoins are Dogecoin and Shiba Inu, and while both are far from good investments, Shiba is higher risk, higher reward, and Dogecoin is the safer long-term play.

Ever since the GameStop and AMC short squeezes in early 2021, meme investing has seen a massive spike in popularity. The idea of “meme investing” involves investing into companies based on their hype and meme value, rather than their actual fundamentals. The idea is that if everyone buys and never sells, the price will skyrocket, and make everyone rich. As one would expect, this type of investing is incredibly risky, and creates more losers than winners, but if one is able to buy a meme stock or coin before it blows up, they can become overnight millionaires. 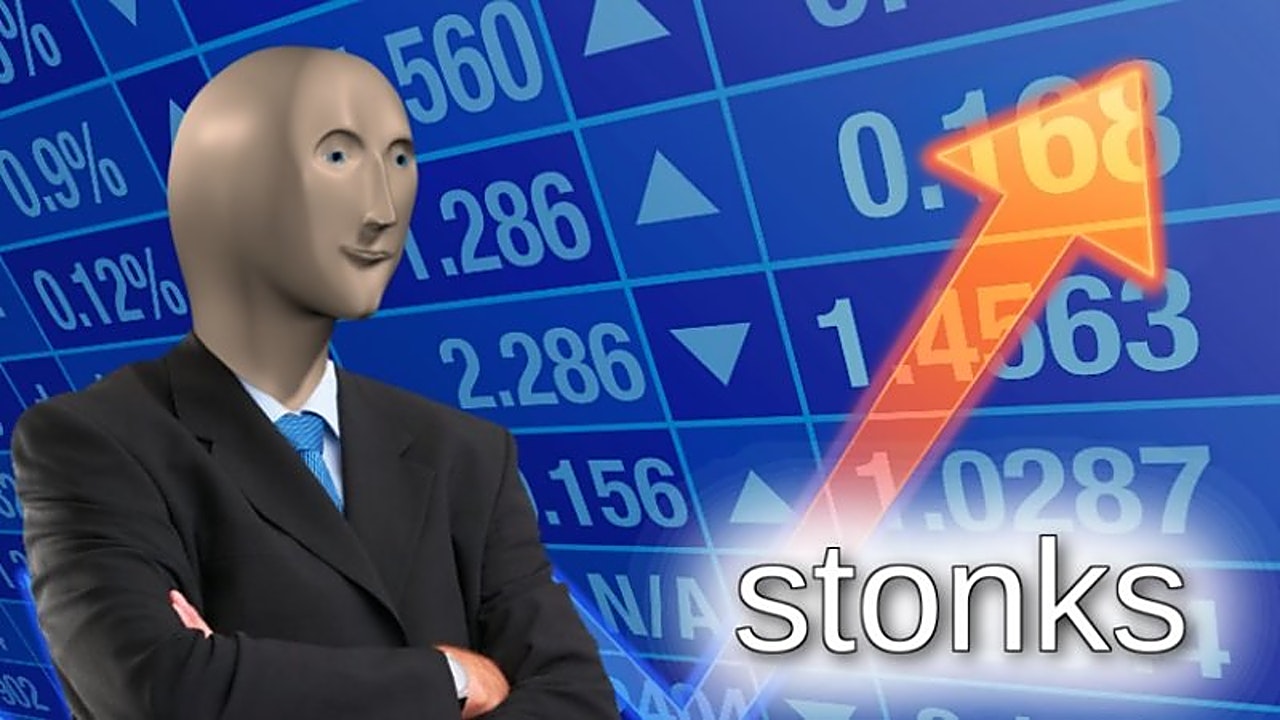 This exact pattern played out with Dogecoin, the original memecoin in the cryptocurrency space, which was released in 2013. At the time, it traded for practically nothing, and had a fairly small market cap. However, in early 2021, it began climbing rapidly, and reached a high of nearly 70 cents and a market capitalization of over $90 billion. It has recently corrected to a price around 30 cents, but is still up over 100,000% over the coin’s price one year ago. 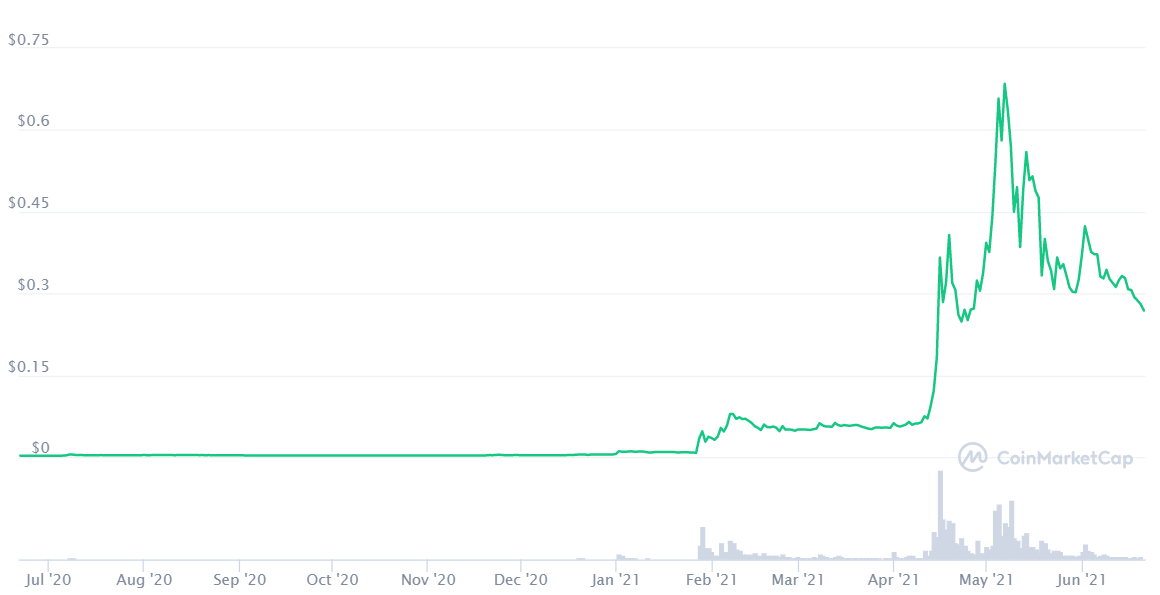 Dogecoin has no use case other than payments, has a 5% inflation rate, and relies on the Litecoin miners to provide security to its blockchain. Even though it has little fundamental value, it has quickly become Elon Musk’s favorite cryptocurrency, and he constantly praises it on his Twitter feed, which has helped fuel its meteoric rise.

Naturally, this type of gain does not go unnoticed, and many projects tried to create their own Dogecoin copies, which used flashy branding and a high circulating supply to dupe retail investors into buying the coin. Many coins, like Safemoon and Doge Token, were created with billions, if not trillions, of coins in circulation, and offered no improvements or any fundamental reason to invest, other than the fact that if other people invested the price would increase. The reason these projects choose to mint so many coins is because it makes the price per coin incredibly low, sometimes as low as $0.0000001, which makes average investors think that the price can reach a dollar easily and make them an instant millionaire. Obviously, this is not the case, as market capitalization is determined by the total supply of coins multiplied by their price, and a coin with a supply of 50 trillion at a price of $1 would be worth more than the entire United States stock market. 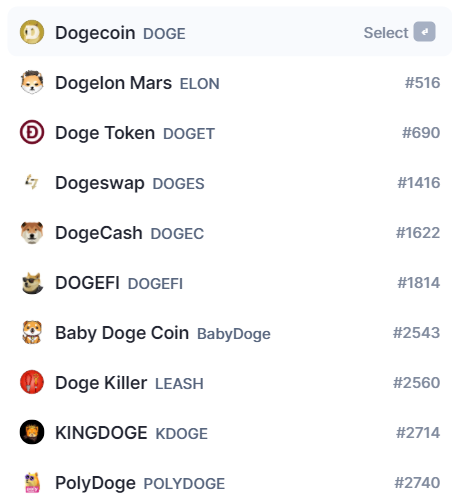 Shiba Inu, however, was able to stand out from the crowd of memecoins and become the people’s choice to be a “Doge Killer.” It was released as a token on the Ethereum blockchain in August 2020, with a total supply of 1 quadrillion tokens. There is no true reason why the SHIB token was chosen by retail investors to be the best memecoin, but that did not stop the price from rising a meteoric 12000x in the time since its release. However, it is down over 70% from its all-time high, which is still a massive profit for anyone lucky enough to buy around the coin’s release. 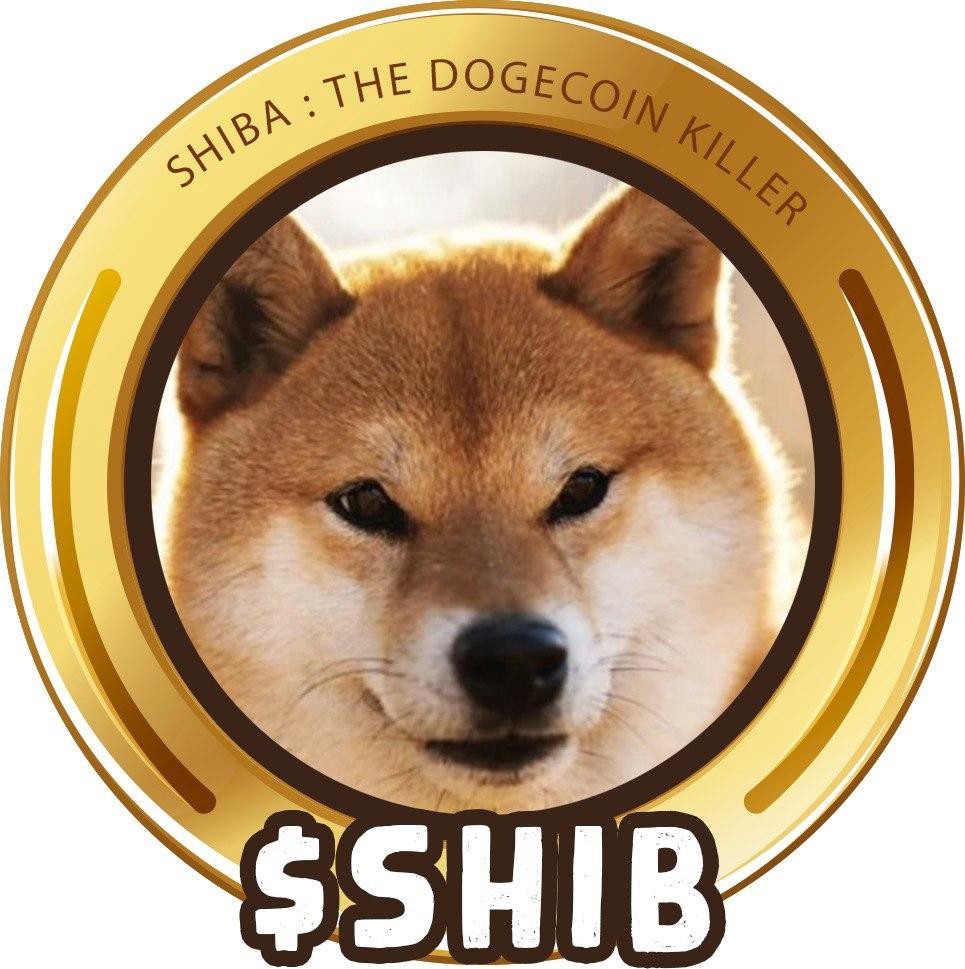 The future roadmap of the Shiba Inu project includes releasing ShibaSwap, a decentralized exchange that will allow users to buy and sell tokens on the Ethereum blockchain. This exchange will have two other tokens, LEASH and BONE. Both of these tokens have an unknown use case related to the exchange, and more information will be released when ShibaSwap gets closer to release. 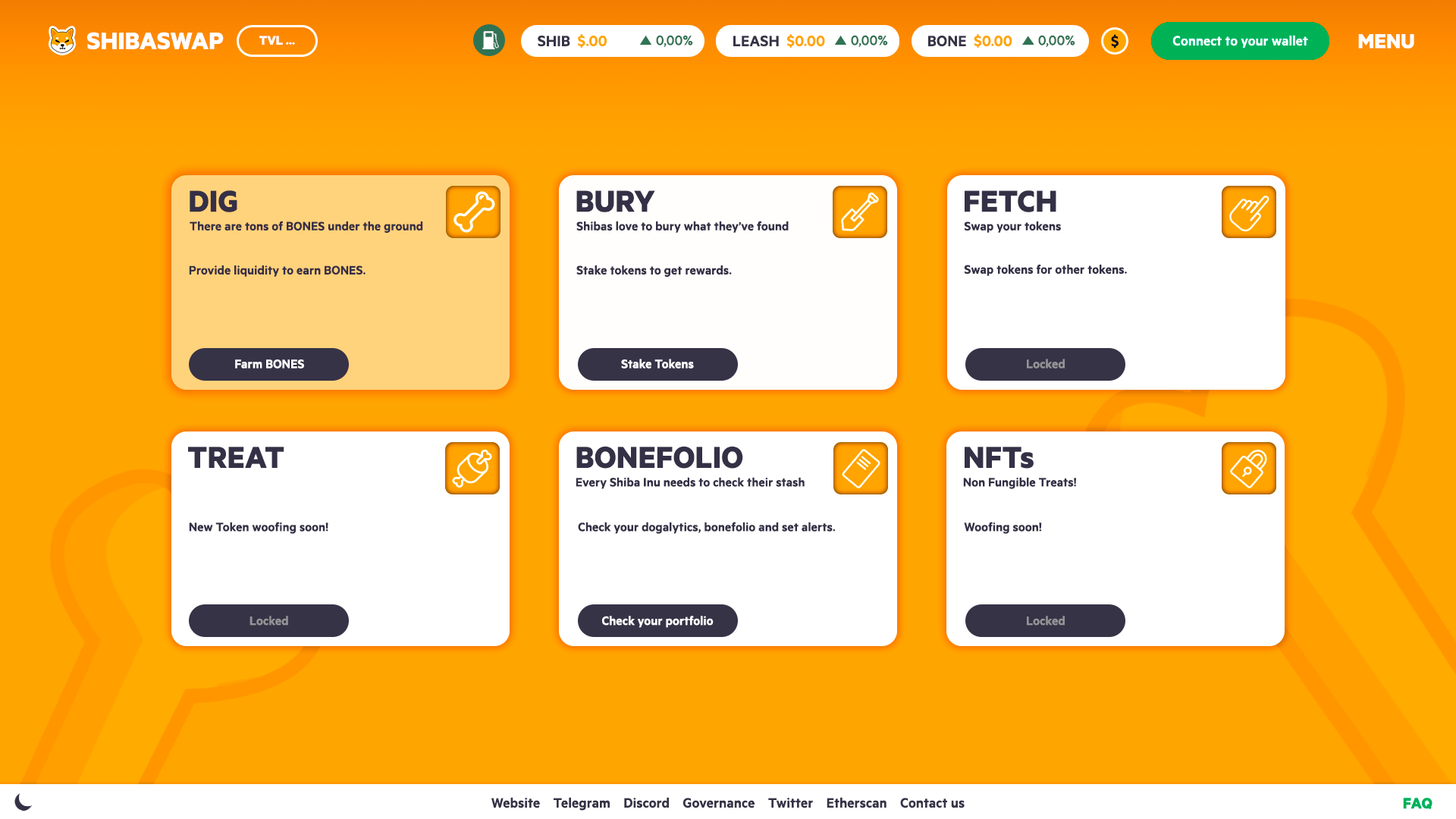 The fact that there is no current use case for LEASH or BONE makes them incredibly speculative investments. Furthermore, ShibaSwap will most likely be a clone of Uniswap, and offer no value to the DeFi ecosystem.

Given the complete lack of a use case for either project, it may appear difficult to decide which one is the better investment. Although SHIB is smaller, it has more room to grow, and if ShibaSwap does turn out to be a success, it could reach new hype-fueled highs. On the other hand, it has been around for less than a year, and has yet to prove that it has any staying power within the cryptocurrency community. If this market downturn continues, investors may lose interest in SHIB, and move to safer cryptocurrencies.

Dogecoin has survived multiple crashes and continually proved that even though it is a memecoin, it has investor interest and will not be going anywhere anytime soon. It is supported by big names such as Mark Cuban and Elon Musk, and has integrated itself so deeply within the cryptocurrency community that there will always have a place for it in the Top 100. For that reason, Dogecoin appears to be safer than Shiba Inu, but investing into any meme currency is a recipe for disaster, unless you are lucky enough to sell before it crashes. 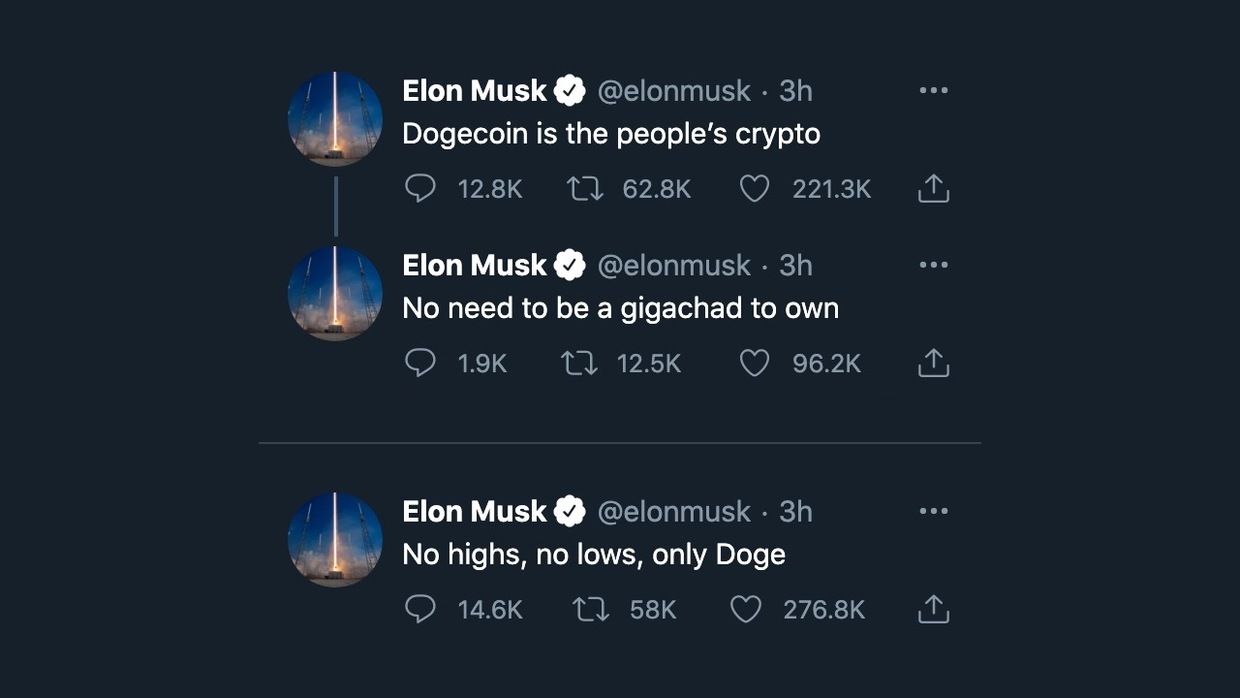 Even though meme coins are fun and have a chance of going to the moon, they also should be treated as a gamble, instead of a true investment. That being said, even though Dogecoin seems fundamentally unable to become the world’s digital reserve asset, as Elon Musk once said, “Arguably the most entertaining outcome, the most ironic outcome, would be that Dogecoin becomes the currency of Earth of the future,” and he is not wrong.