Summary: Connext is the interoperability protocol of L2 Ethereum. The team has raised a $12m ecosystem round led by 1kx and ConsenSys Mesh, with participation from top funds, exchanges, staking service providers, L2 founders, angels, and other key ecosystem players. Connext has been growing at an astounding 50% week over week since their launch earlier this ...

Connext, the interoperability protocol of L2 Ethereum, has raised a $12m ecosystem round from 82(!) of the top funds, exchanges, angels, staking service providers, and ecosystem players in the space. The round is led by 1kx on the fund side, and ConsenSys Mesh on the ecosystem side.

Participating funds and exchanges include:

Participating angels and ecosystem players include: 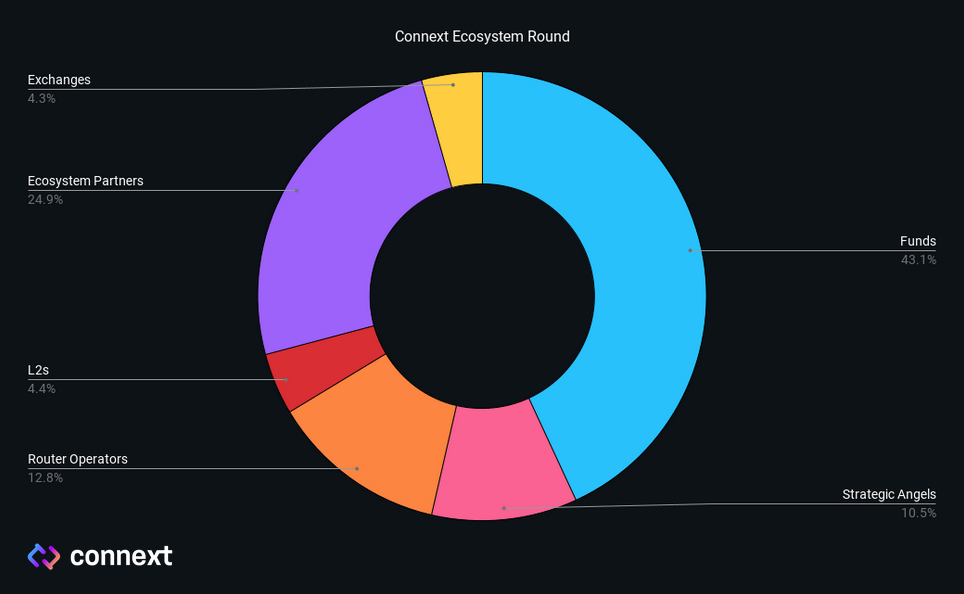 With this raise, the team brings on key stakeholders that will secure Connext's position as the leading interoperability protocol for fast, noncustodial communication between rollups and other Ethereum-compatible chains.

"As an interoperability protocol, we think we win by building the greatest ecosystem in the space. We are thrilled with how many fantastic individuals and institutions have chosen to partner up with us, and are beyond excited to work with them as we continue to roll out the network." - Arjun Bhuptani, Connext Project Lead.

Perhaps most importantly, this raise creates incentive alignment with players like ConsenSys Mesh and Edge & Node, who plan to not only contribute capital, but also help with key research and development around Connext's protocols and network launch.

"We view Connext as the leading approach to Ethereum interoperability and see an opportunity to leverage ConsenSys Mesh's existing infrastructure and resources to support their ecosystem and drive adoption." - Joseph Lubin, Founder of ConsenSys.

Funds from the raise will be used to continue growing the team, as well as launch route auctions, a mechanism to rapidly scale up liquidity by aggregating across all routers in the network.

Connext has been building at the forefront of L2 scalability since it received a grant from the Ethereum Foundation in 2018 for the first ever state channel hub on Ethereum. In the summer of 2020, the team noticed the fragmentation in the rollup space and created a prototype to instantly and cheaply transfer value between testnet implentations of Optimism, Arbitrum, SKALE, Polygon, and others. The team raised a $2.2m round from Polychain, 1kx and Huobi earlier this year and, since going live with their mainnet release, has grown at an astounding 50% week over week to hit $40m in weekly network volume and >40,000 unique users.

"The adoption of various L1 and L2 technologies is leading to an increasingly fragmented landscape of applications, liquidity, and user experiences. Connext has been quietly building the glue for this ecosystem and is now ready to support the massive demand for cross-chain applications.” - Lasse Clausen, Founding Partner at 1kx

Connext is the interoperability protocol of L2 Ethereum. Connext enables sending value and calling contracts across Ethereum-compatible chains and L2s, with eventual plug-in support for non-Ethereum systems. Unlike other approaches, the Connext does this without weakening economic security by introducing third party validators - it instead has the same trust considerations as the underlying chain(s).

Connext is an open source, community-driven project that aims to become a truly decentralized public good. You can learn more about Connext on their website, by following their twitter, joining the community chat, and by checking out their code.