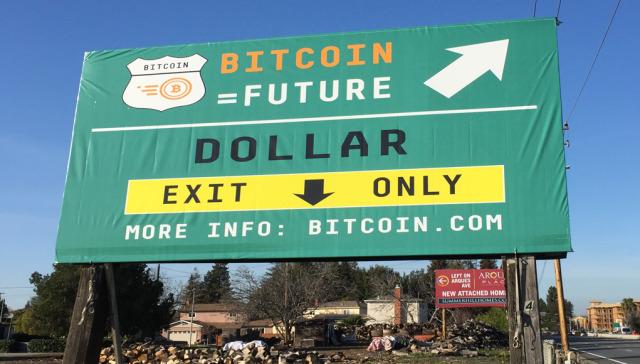 What Does the Surge in Advertising Mean for the Cryptocurrency Market?

Billions of dollars are being spent on marketing cryptocurrencies and crypto companies to the general public. These advertisements have come in many different forms, from arena naming rights to incentive programs, and could help propel cryptocurrencies to the status of a mainstream asset.

In the 2017 bullrun, the general public was exposed to cryptocurrencies for the first time thanks to news pieces run by media conglomerates such as the Wall Street Journal, CNBC, and CNN. This year, cryptocurrencies have been covered by every single news channel on a near-weekly basis, as the fervor behind NFTs and memecoins like Dogecoin has become mainstream. 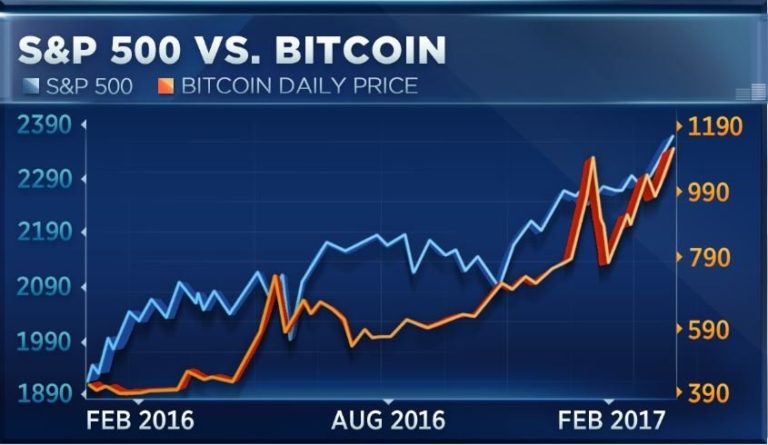 This push into mainstream culture and increased awareness has led a lot of companies within the cryptocurrency space, such as Coinbase and Crypto.com, to become incredibly valuable, and they have chosen to use a significant portion of their budget on marketing efforts in order to ensure that cryptocurrencies do not fall out of favor with the general public.

One of the most popular avenues for cryptocurrency companies to advertise in has been the sports world. Almost every major American sports league has some sort of long-term partnership with a cryptocurrency company. For example, Coinbase is the exclusive cryptocurrency platform partner of the NBA, and their logo can be found on the courts of all 30 NBA teams. Additionally, FTX has a partnership with the MLB which sees their logo on the outfit of every umpire, and Crypto.com has a $100 million deal with the UFC to have their branding in the octagon and on the outfits of the fighters. Most significantly, Crypto.com spent a rumored $700 million to change the name of the Staples Center, where the Los Angeles Lakers play and one of the most famous arenas in the world, to Crypto.com Arena in a deal lasting until 2041. 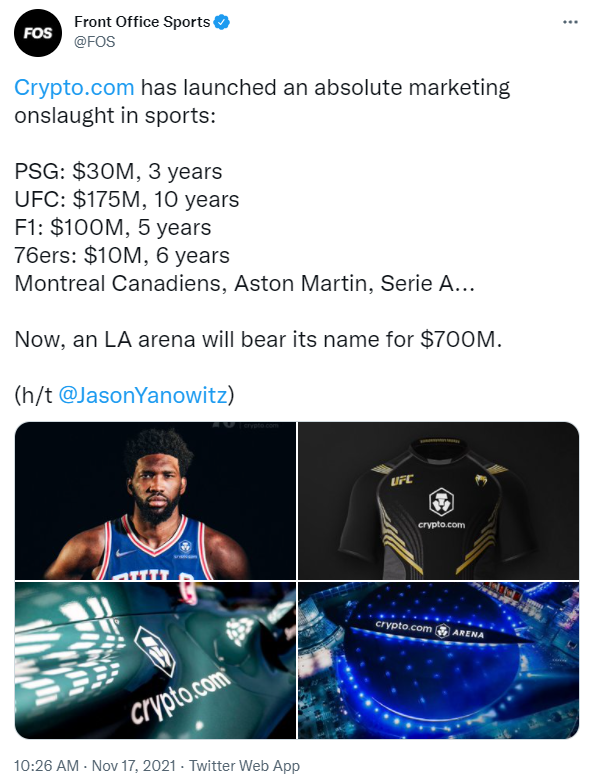 The presence of cryptocurrency-associated branding and names at every sporting event will bring cryptocurrency awareness to billions of households around the world, and subconsciously help make cryptocurrencies a legitimate investment prospect. This strategy has been working well for Crypto.com's CRO token, which has quadrupled in value in the past couple of weeks. 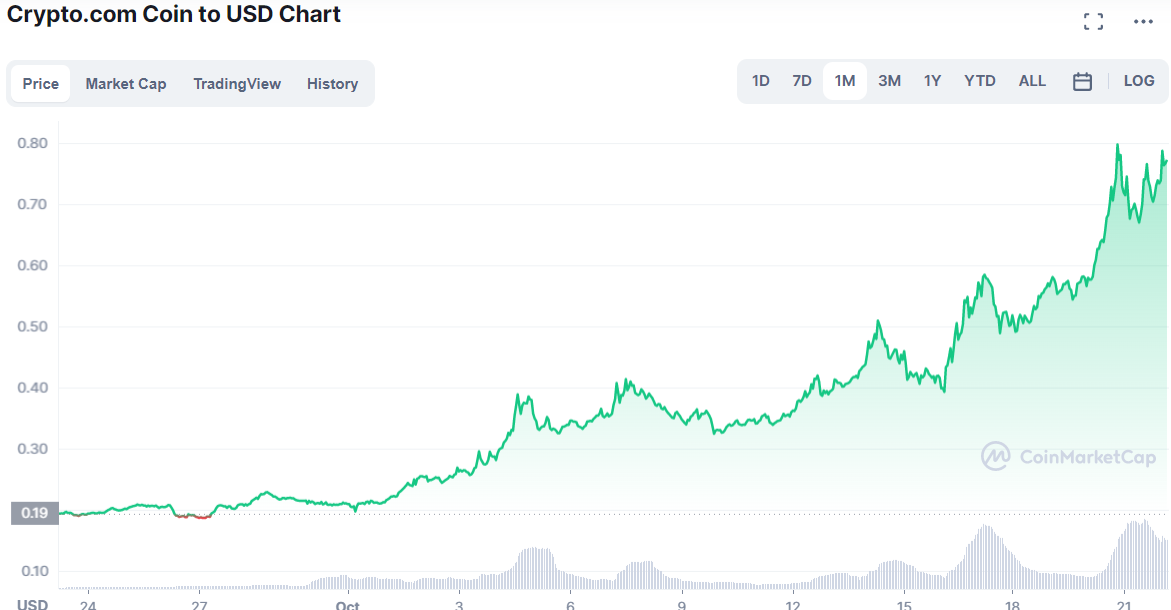 These companies are also pushing their marketing efforts in more conventional ways, such as commercials with famous celebrities and athletes and YouTube ads. Yet again, Crypto.com is leading the charge in this field, as they have Oscar-winning actor Matt Damon featured in some of their commercials advertising their platform.

Not only companies but also cryptocurrencies themselves have begun advertising campaigns with massive budgets. For example, Avalanche’s 'Avalanche Rush DeFi Incentive Program' committed $180 million in AVAX tokens as an incentive for users to use the DeFi applications on the Avalanche blockchain. This unconventional style of marketing, where people are paid for using their platform, has proven to be incredibly successful for AVAX, which is now a top 10 cryptocurrency by market capitalization. Other cryptocurrencies and smart contract platforms, such as Harmony, Fantom, and Polygon, have followed this approach with varying degrees of success. 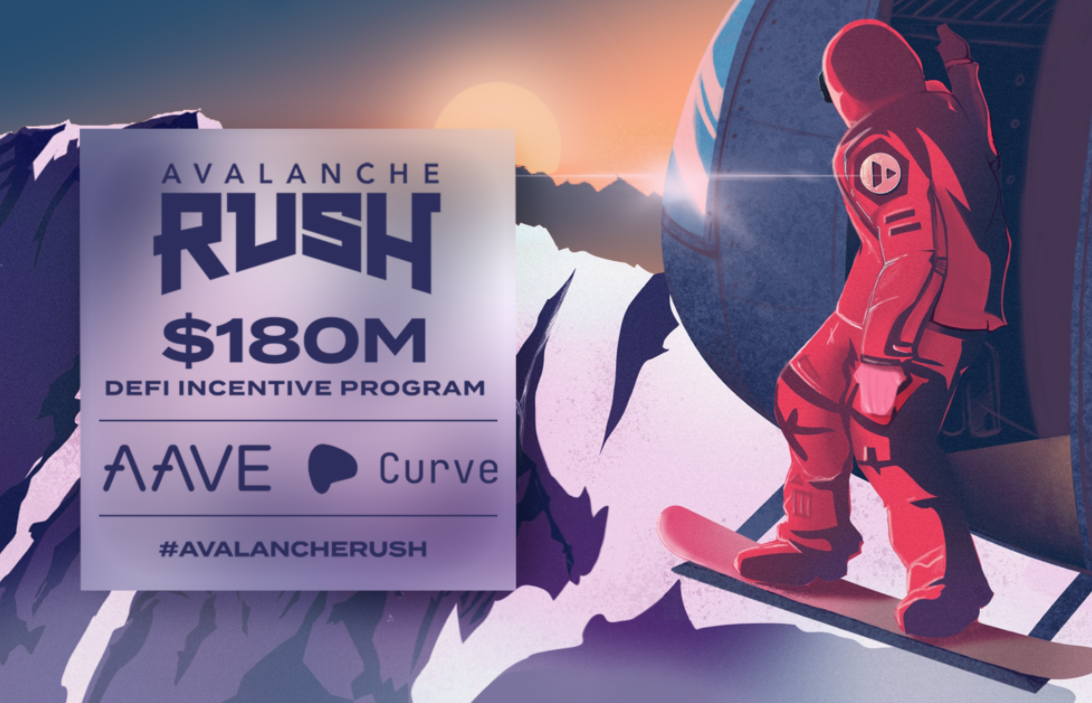 Though this advertising may appear to be a waste of money, it may be the critical move needed to legitimize cryptocurrencies to mainstream audiences. The more someone sees a cryptocurrency advertised or hears about a certain exchange, the more they will subconsciously begin to become used to the idea of cryptocurrencies as an investment vehicle not unlike stocks or commodities. Thus, they will be more likely to invest, which is obviously positive for the market as a whole.

Unfortunately, advertisements are not always positive, and some scam cryptocurrencies are already taking advantage of ads as a way to promote their fake or duplicitous projects. For example, the HEX cryptocurrency advertises their token’s gains in newspapers and on the sides of cars in an attempt to make people FOMO into buying HEX, instead of buying the project due to a fundamental belief in its value. These scamcoins are the reason why Google Ads banned the advertisement of cryptocurrencies in 2018, and now only allows cryptocurrency wallets or exchanges registered with FinCEN to advertise on their platform.

Overall, the increased marketing effort from cryptocurrencies and related companies has been incredibly positive for the space. Even though some projects take advantage of advertising to scam unsuspecting investors, this is far from the norm and is fairly well regulated and prevented. Companies like Crypto.com, FTX, and Coinbase are paving the way for more people to join the cryptocurrency space as investors and shareholders in blockchain-related companies.

Last Update:
Tags: Adoption,Coinbase,Crypto Adoption,Crypto.com
Link: What Does the Surge in Advertising Mean for the Cryptocurrency Market?   [Copy]