Summary: When people discuss web3 it’s often revolved around concepts such as decentralization and token-based economics. In this post, I want to propose a new concept derived from the web3 framework that has the potential to remodel the ways businesses interact and transact with consumers, which I will call “Web3 Commerce”. Web2 Commerce vs. Web3 Commerce ...

When people discuss web3 it’s often revolved around concepts such as decentralization and token-based economics. In this post, I want to propose a new concept derived from the web3 framework that has the potential to remodel the ways businesses interact and transact with consumers, which I will call “Web3 Commerce”. 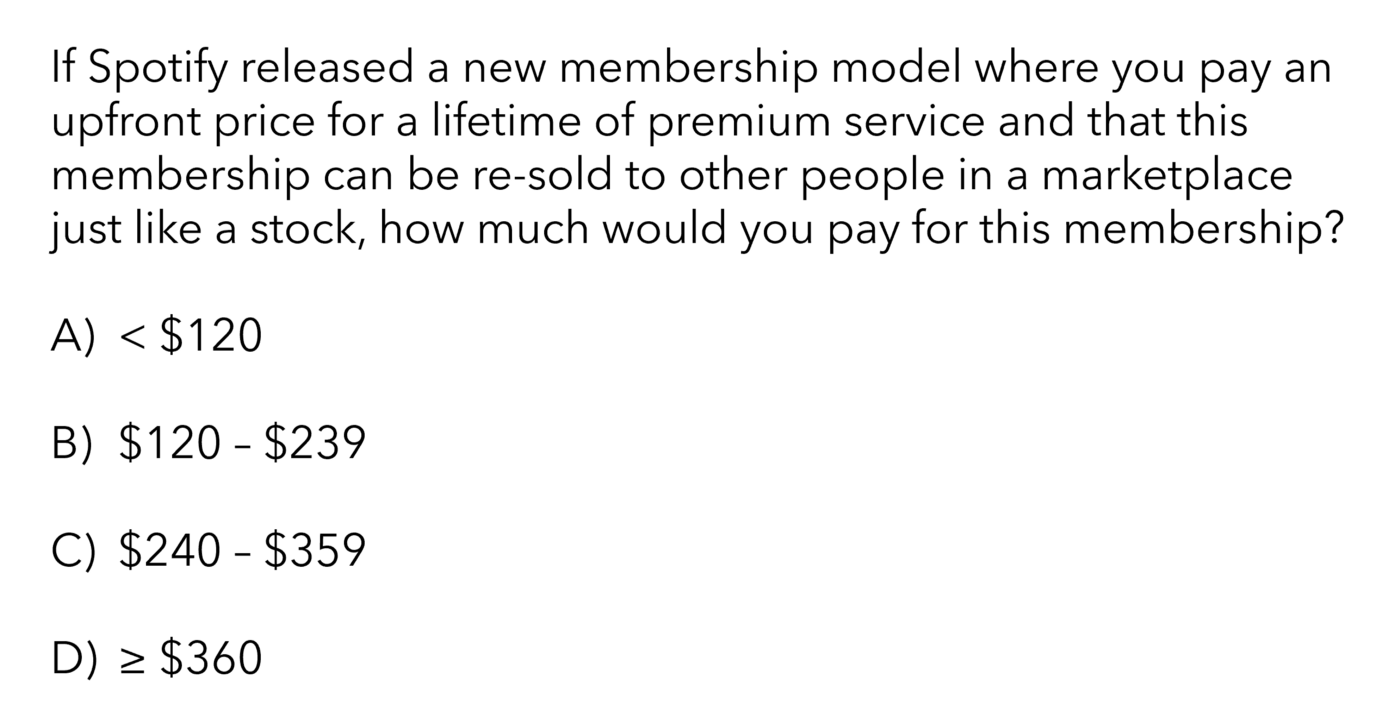 Before discussing Web3 Commerce, it’s important to first illustrate what “Web2 Commerce” is. Currently, business transactions happen as the following:

In contrast, Web3 Commerce can be illustrated as the following:

Instead of selling a one-time utility, the business sells an entitlement to future recurring utilities, which can be represented by an NFT, to the consumer for a one-time payment. The consumer, having ownership of this NFT, can then trade this to other consumers in the secondary market at a market-determined price. Moreover, each time the NFT is traded the business receives a percentage of the selling price as a royalty. Whereas Web2 Commerce is transaction-based, Web3 Commerce can be described as ownership-based.

For example, Mcdonald's sells an NFT, which gives the owner one free Big Mac per week in perpetuity, to a customer for $100. This customer receives a free Big Mac every week until they get tired of it, at which time they re-sell this NFT in the secondary market to another consumer who loves Big Macs even more for $120. In this transaction, Mcdonald's receives $12 as royalty (assuming a 10% royalty rate) and the first consumer makes $8 in profit ($120 selling price - $100 original cost - $12 royalty).

At first glance, Web3 Commerce seems not only overly complex but also uneconomical, as the business is giving away perpetual utilities for a one-time payment and sporadic royalties that are unlikely to cover the cost of providing the ongoing utilities. So what is the justification for Web3 Commerce?

On the most surface level, Web3 Commerce can be utilized to provide long-term customer attraction and retention benefits similar to traditional loyalty and membership programs. For example, a bar can sell a limited number of NFTs that grant one free drink every Tuesday (usually the day with the least traffic) to customers, who are then more likely to visit this bar on Tuesdays. For the bar, any incremental food and drink sales from the additional visits exceeding the cost of the free drink would result in a positive net profit. To some businesses, especially in retail, the loyalty benefit alone is sufficient to justify the implementation of Web3 Commerce.

However, what makes Web3 Commerce truly distinctive is the market-priced, re-sale mechanism of NFTs that enables consumers to financially share in the success and growth of the businesses that they engage with. This creates a unique incentive alignment between the business and the consumer that’s lacking in Web2 Commerce.

Suppose there are two fans of the Chicago Bulls basketball team. The first fan had been attending the team’s games before they had Michael Jordan and were mediocre, and the second fan only started to attend games after Michael Jordan made the team popular. Despite the first fan contributing more to the Bulls both from a financial and a loyalty perspective, this fan does not receive any reward and must pay the same amount of money later on to watch Bulls games as the second fan.

Under the Web3 Commerce model, the Chicago Bulls could have sold a limited number of NFTs that grant perpetual access to all Bulls games, which the loyal fan could have purchased at a relatively low price when the team was unpopular. Later when the Bulls became more popular, the loyal fan could benefit from either 1) being able to watch the now popular Bulls games at the cost basis of when the team was unpopular, or 2) re-selling this NFT to other Bulls fans at a much higher price and make a profit.

One of my favorite dessert places is Milk Bar, which I have been visiting each week for the past six months. Despite buying a cake slice from them every week, I have only ever posted once about them on my Instagram stories. If Milk Bar implements a Web3 Commerce model and sells a limited number of NFTs that grant one free cake slice per week, I would buy it and it would completely change my consumer behavior with the store.

Whereas before I rarely posted about Milk Bar on my Instagram, now each time when I redeem the free cake I would post a story about it. Part of my motivation is to show off receiving free cake from one of the most famous dessert stores in New York City, and the other part of my motivation is to promote Milk Bar so that its popularity and demand grows which would then increase the value of my NFT. For Milk Bar, the resulting views of my Instagram story and conversations answering replies such as “Where is this?”, “Is it good?”, “How did you get the free cake?” would generate significant free marketing that more than offsets the cost of the free cake.

Asides from the loyalty and incentive alignment benefits, Web3 Commerce also allows businesses to receive direct monetary benefits through royalty, which is earned every time their NFT is traded in the secondary market. Royalty is calculated as a percentage of the re-sale price and it increases as the market value of the NFT grows over time. Royalty serves to incentivize and reward the business for sustaining and improving the utility it provides to owners of the NFT.

It is important to note that, for the majority of businesses, royalty will likely only be a small percentage of their total revenues due to the sporadic nature of secondary market trades and limitations on the total number of NFTs that can be optimally issued (which must be scarce in order to sustain value), and that the transaction-based Web2 Commerce model will continue to be most effective at maximizing revenues. It is also important to emphasize that, Web3 Commerce is not intended to replace Web2 Commerce, but rather to complement and enhance Web2 Commerce through the benefits mentioned previously.

To maximize the benefits of Web3 Commerce, an optimum must be achieved among three variables, the total number of NFTs issued, the utility provided, and the royalty rate. The method of optimizing these variables is beyond the scope of this article and further economic studies can be pursued on this topic.

One of the most common questions raised around the concept of Web3 Commerce is, “This whole system requires people re-selling their NFTs to work, what if people really like the perpetual benefits and don’t want to sell?” Buys happen when a consumer’s marginal utility for the recurring benefits or services exceeds the market price of the NFT, and sells happen when the price of the NFT exceeds the consumer’s marginal utility. There are three factors that assure why a consumer will likely not hold on to their NFTs forever and that secondary market transactions will continuously occur.

The first factor is the law of diminishing marginal utility, which describes how the first unit of consumption of a particular good or service yields more utility than the second and subsequent units, with a continuing reduction for greater amounts. For example, a consumer’s preference for a Big Mac after eating it for 20 straight weeks is probably less than their preference after eating the Big Mac for the first time. Therefore, the consumer’s marginal utility for any benefit or service will decline over time (assuming all else being equal), which would eventually prompt a sell when their marginal utility declines below the market price of the NFT.

Another common question raised is, “How do businesses price their NFTs in the initial sale?” This is a complex economic question that merits further studies and is beyond the scope of this article. However, it should be noted that from an overall financial perspective, the initial pricing of the NFTs is somewhat inconsequential because 1) the market will immediately adjust the price of the NFTs to its fair value based on supply and demand after the initial sale, and 2) royalties, which are perpetual and make up the majority of the financial income from the NFTs, are calculated on the market price of the NFTs rather than the initial sales price.

Finally, I want to make some speculations on what the future could look like with Web3 Commerce. For businesses, while Web2 Commerce will still be the primary channel of revenue, Web3 Commerce will gradually become an integral aspect of their marketing and sales strategy. And similar t

o stock prices, each business’s NFT prices will begin to serve as an important real-time indicator of business performance and brand value. For consumers, it will become more and more common to receive services through the ownership of NFTs instead of one-time purchases or subscriptions. And as Web3 Commerce grows, consumers will likely become increasingly vocal in advocating and championing the brands that they support.

While most businesses will host capabilities of Web3 Commerce on their own domains, I believe that the vast majority of Web3 Commerce discovery and transactions will happen on centralized marketplace platforms similar to Amazon for e-commerce and New York Stock Exchange for stocks. Lastly, I believe that this market for Web3 Commerce will evolve over time to be highly efficient and liquid — enabled by three types of market participants: 1) die-hard fans who would buy and hold the NFTs of the businesses they support regardless of the economics, 2) utilitarians who purchase NFTs because it’s a more economical means to acquire utility than the Web2 Commerce model, and 3) speculators who trade NFTs with the goal of profiting on market inefficiencies and future expectations.

Last: Argentina's Central Bank Blocks Financial Institutions from Offering Crypto Services
Next: According to Bitpush Market Data, ETH is now $2749.81, up 0.03% in 10 minutes, breaks above $2700 mark.