Big Funds Back Crypto, CPI at 8.3% Signaling Inflation has Peaked

Summary: Bitcoin is currently being traded at $30,775, which is only a slight decrease in the last 24 hours at 1.50%, according to Bitpush Terminal data as the consumer price index (CPI) number goes live for April. The price of Bitcoin dropped around $2,000 within minutes on Wednesday mornings to a low of $29,458, before regaining ...

Bitcoin is currently being traded at $30,775, which is only a slight decrease in the last 24 hours at 1.50%, according to Bitpush Terminal data as the consumer price index (CPI) number goes live for April. The price of Bitcoin dropped around $2,000 within minutes on Wednesday mornings to a low of $29,458, before regaining most of that to where it currently sits.

In addition, the CPI percentage for April comes in at 0.3%, which is 8.3% year-to-date, showing the first decrease in two years. This decrease could potentially mean that inflation has peaked.

Rishi Bagree, a political observer and verified account on Twitter, agreed with inflation hypothesis tweeting, “Seems like inflation has peaked in [the] USA and so has US bond yields.”

Heather Long, Washington Post economic columnist and Editorial Board member, also got in on the conversation after the CPI numbers.

“The encouraging news: Inflation only rose 0.3% in April. That’s a big cool off from 1.2% growth in March and 0.8% in February,” Long tweeted. “There’s hope inflation peaked in March and will start to come down. But keep in mind that it’s still likely to be painfully high for months to come.” 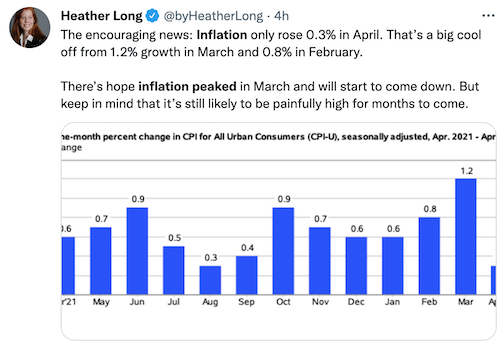 According to the CPI report, inflation only rose by 0.3% which is a number we haven’t seen since August of last year.

Of course, there are many other analysts suggesting that we haven’t seen inflation peak, and that we should be preparing for more to come. However, the CPI percentage is certainly a good benchmark to go off of.

In addition to the CPI rate decreasing compared to the last few months, Bitcoin investors should sleep a little easier at night knowing big funds have come into the encryption market including investment platform Republic’s plan to launch a $700 million crypto fund, asset management agency Fasanara’s goal to raise a $350 million fund to invest in the crypto market and financial service provider Jack Henry cooperation with NYDIG to build a bridge for tradition finance to participate in Bitcoin investing.

While the market has been extremely volatile in the last few days with the TerraUSD (UST) crisis, investors should be pleased to know they are along for the ride with fellow big businesses in their investments in the crypto space.

MMCrypto, a UAE-based crypto account on Twitter, furthered this sentiment by tweeting, “#Bitcoin price going down, while the value is going up makes me BULLISH!”

Furthermore, MicroStrategy co-founder Michael Saylor remains bullish on crypto despite the recent crash tweeting, “The #bitcoin price is set by those with more money and less knowledge than you. In time, they will get the knowledge and you will get the money.”

This tweet comes after he announced that MicroStrategy, a business intelligence, mobile software, and cloud-based services company,” wouldn’t have to sell their Bitcoin as collateral for their loans.

However, the difficulty of mining reached a new high, which is diametrically opposed to the trend of currency prices, providing more evidence for the position that big capital is optimistic about the future of the market. The number of addresses holding 1BTC has reached 830,000, and the number of addresses with 0.01 has reached a record high, indicating that small and medium-sized retail investors are also optimistic about the future.