Liquidation at $906M in last 24hrs, Bitcoin and Ethereum Down Big, is it Time to Panic?

Summary: $906 million in funds have been liquidated in the last 24 hours from the cryptocurrency market as the two most prized possessions, Bitcoin (BTC) and Ethereum (ETH) plunge further into the depths of despair. Other cryptocurrencies have seen familiar fates, dropping anywhere from 7% to 96% in the case of LUNA.  In short, liquidation happens ...

$906 million in funds have been liquidated in the last 24 hours from the cryptocurrency market as the two most prized possessions, Bitcoin (BTC) and Ethereum (ETH) plunge further into the depths of despair. Other cryptocurrencies have seen familiar fates, dropping anywhere from 7% to 96% in the case of LUNA.

In short, liquidation happens in the crypto market when a trader has insufficient funds to fund a margin call: a call for extra collateral. In addition, liquidation happens when investors are fearful in the current climate and sell at a small loss instead of risking a further loss. On the contrary, they won’t have the ability to wait for the project to go up again, unless they buy back in at a lower cost.

Bitcoin is currently down to $29,093, which is -7.50% in the last 24 hours, according to Bitpush Terminal data. That means that Bitcoin is down more than 50% from its all-time high (ATH). Ambcrypto.com suggests that the prized digital asset could drop further into the $24,000 range in the next few weeks.

Despite the warning signs and the downward spiral Bitcoin and the crypto market is currently in, investors are still bullish on BTC.

“The LOWER #Bitcoin goes, the more BULLISH I become. Why? Price going down, value staying the same. This is a bullish divergence!,” MMCrypto tweeted on May 8.

While this statement was much easier to say on May 8, as the price of BTC was above the $34,000 price tag until the end of the day, MMCrypto still holds true to this tweet. As he tweeted that every price dip, he buys knowing that he will eventually win in the long game.

In addition, other accounts have mimicked his May 8 tweet, tweeting the exact same or a very similar tweet. In short, others in the community are keeping their faith and believe in Bitcoin as a whole.

One of these people who believes in the longevity, technology and utility behind Bitcoin is Samsom Mow, CEO for social gaming company Pixelmatic. He also works alongside countries and nationstates in their Bitcoin adoption. In response to the recent fear and trajectory in the current crypto market Mow tweeted, “You can’t put a price on incorruptible money #Bitcoin.”

Michael Saylor, CEO of embedded analytics platform MicroStrategy got in on the action as well.

“The number of bitcoin wallet addresses on-chain with at least $285 worth of bitcoin continues to hit an all-time high,” Pomp tweeted. “The average individual citizen is stacking sats as the price drops.” 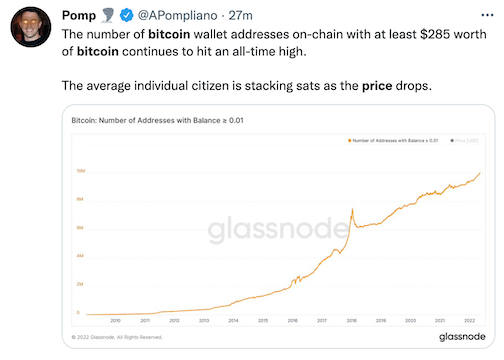 While it definitely is a tumultuous time, Bitcoin investors should know that they are in good company. Not only are the in the same boat as some massive corporations, but they are with regular citizens also looking to benefit from all that Bitcoin and crypto has to offer.

Speaking of liquidation, Ether futures led liquidation losses at $333 million in the past 24 hours, according to a report. It is currently being traded at $1,982, which puts it at a 15.57% loss in the last 24 hours. Like Bitcoin, the question then becomes have we seen the worst for ETH, or will it continue to plunge?

According to data from Santiment, Ethereum’s transaction volumes spiked to 9.23 million on May 11, which is the highest since June 2021, resulting in an increase in gas price and ultimately transaction price.

In addition, more data from Santiment shows that whales have been especially active during the sell-off, with over 16,000 transactions taking place on May 11 valued at over $100,000. Furthermore, more than 3,000 transactions took place at more than $1 million.

Just like Bitcoin, Ethereum investors are still high on the product.

“Ethereum price is down, but my conviction is at an all time high,” tweeted Crypto-Gucci.ethᵍᵐ, a self proclaimed Ethereum documentor on Twitter.

The problem with Ethereum is that despite its different capabilities compared to Bitcoin, there isn’t as much mass adoption, therefore there are just less backers of the cryptocurrency. As a result, the fear and greed index for Ethereum is at a staggering 19. 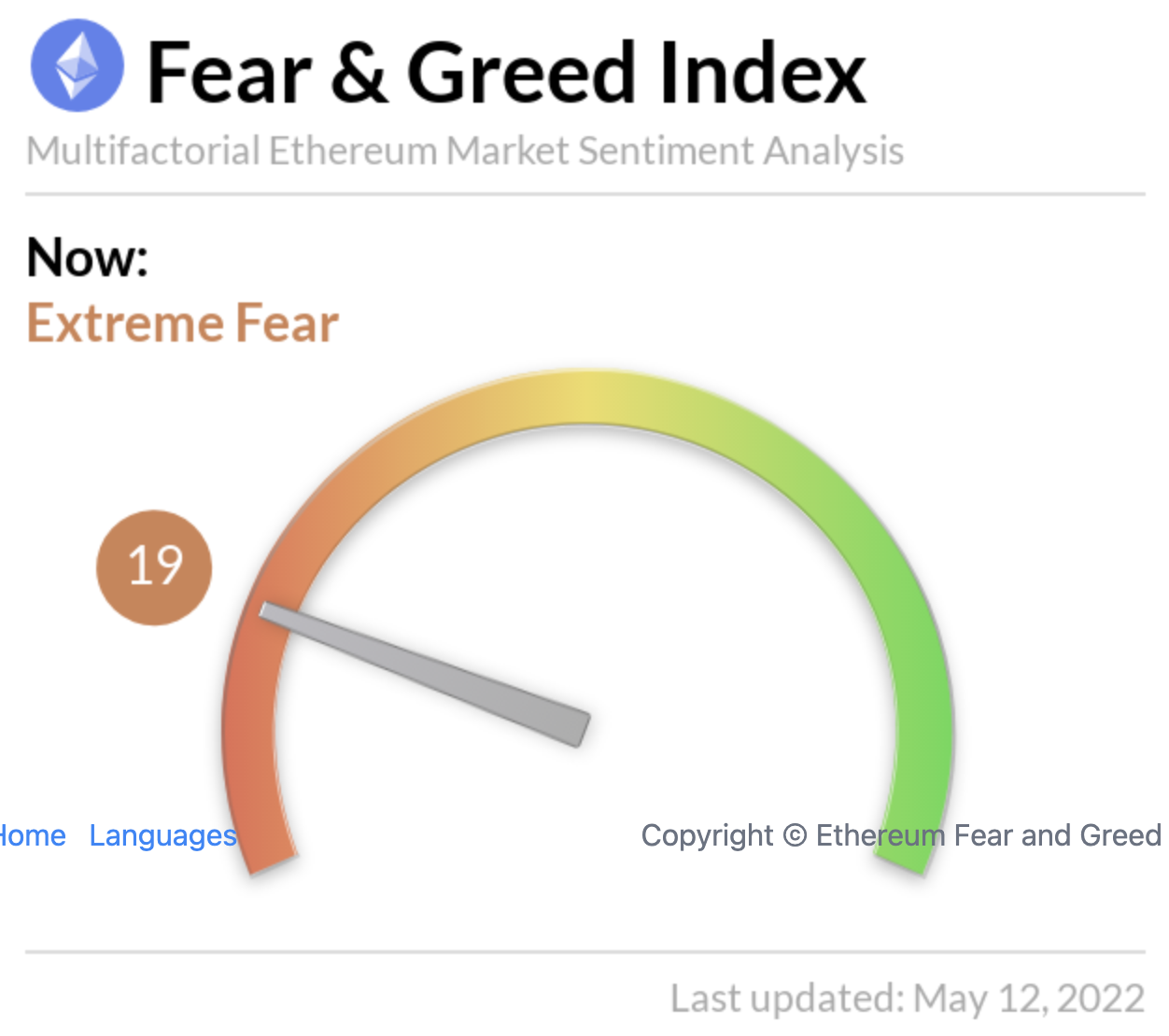 Last Update:
Tags: Bitcoin,Ethereum
Link: Liquidation at $906M in last 24hrs, Bitcoin and Ethereum Down Big, is it Time to Panic?   [Copy]