Summary: Elon Musk tweeted that his $44 billion Twitter acquisition at $54.20 a share cannot go through until Twitter confirms that their estimate of spam/fake accounts is at or less than 5% of users.  “20% fake/spam accounts, while 4 times what Twitter claims, could be *much* higher. My offer was based on Twitter's SEC filings being ...

Elon Musk tweeted that his $44 billion Twitter acquisition at $54.20 a share cannot go through until Twitter confirms that their estimate of spam/fake accounts is at or less than 5% of users. 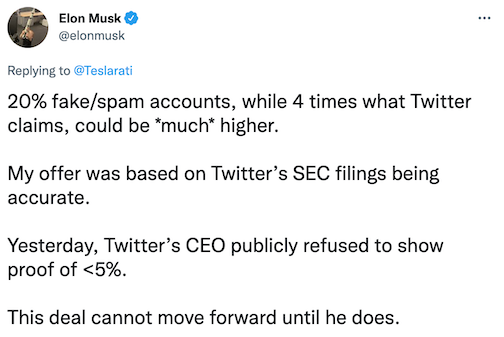 “20% fake/spam accounts, while 4 times what Twitter claims, could be *much* higher. My offer was based on Twitter's SEC filings being accurate. Yesterday, Twitter's CEO publicly refused to show proof of <5%. This deal cannot move forward until he does,” the tweet reads.

This latest tweet follows a May 13 tweet which initially put the deal on alert for not being able to go through. Musk said, “Twitter deal temporarily on hold pending details supporting calculation that spam/fake accounts do indeed represent less than 5% of users.”

Despite the warning shot, Musk followed up that tweet saying he is still committed to the acquisition.

While Twitter stands by their estimate of spam accounts making up about 5% of users, they did acknowledge in a regulatory filing that it could be more than 5%, simply because they took a random sample of users and the fake accounts came out to about 5%. It could be more in theory if their sample group happened to have a slightly smaller ratio than the true ratio of spam accounts across all users.

The Tesla and SpaceX CEO also did not present any information contrary to Twitter’s estimates which leaves people wondering if his tweet is being used as a bargaining tactic in order to get Twitter to lower their price. Twitter stock is currently valued at $37.24, which is substantially lower than the $54.20 Musk is set to pay.

In order to verify this information himself, Musk tweeted that his team will also conduct similar studies like the one that Twitter carried out.

“To find out, my team will do a random sample of 100 followers of @twitter. I invite others to repeat the same process and see what they discover … ,” Musk tweeted.

His last remark on the issue was a funny and clever tweet where he said, “the bots are angry at being counted.”

Spam bots and fake accounts have also been a social media-wide challenge affecting the majority of platforms in one way or another. They can hurt the experience for legitimate users by creating chaos on platforms where users go to escape that very thing.

Operators of “bots” have used fake/automated accounts in the past to incite violence, spread false information, potentially tamper with elections and create chaos among users. Not only that, but fake accounts make it more challenging for advertisers to judge what they are actually getting for their money.

The problem with fake accounts is they are popping up so frequently that it’s almost an impossible task to get rid of them. Facebook, YouTube and others have used artificial intelligence (A.I.) to flag fake accounts and possibly suspend them, but it’s not a foolproof method.

If developers create an aggressive A.I. to weed out these fake accounts, they will also suspend legitimate users because of the nature of the A.I. On the other hand, if developers make a more lenient, friendly A.I they will not be able to fully eliminate the bots.