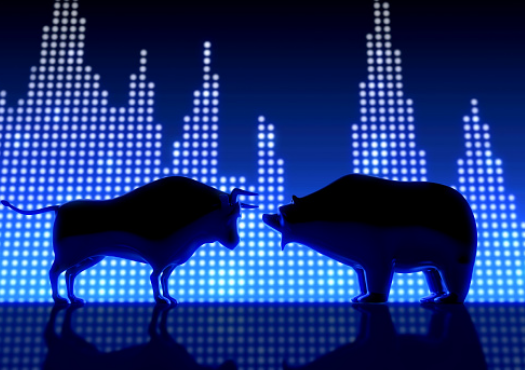 Summary: Chinese exchanges such as Binance and Huobi appear to be in a much stronger financial position through the bear market relative to their competitors abroad. United States Gemini and Blockfi, as well as Singapore's Crypto.com, have all been announcing job cuts, while their rivals in China appear to be expanding. The entire crypto market is ...

Chinese exchanges such as Binance and Huobi appear to be in a much stronger financial position through the bear market relative to their competitors abroad. United States Gemini and Blockfi, as well as Singapore's Crypto.com, have all been announcing job cuts, while their rivals in China appear to be expanding.

The entire crypto market is down 60% since January, and Bitcoin alone has gotten hammered by over 20% in the last week alone. These downturns have seriously caught some investors unprepared, but a few large institutions like Binance are looking to take advantage of the blood in the water.

According to a recent Fortune interview, Changpeng Zhao or CZ, the CEO and largest shareholder of Binance, a Chinese-based exchange, is looking to take advantage of the current downturn. "I'm not debating that it is disastrous. It is bad," CZ said, "But when this disaster is happening, there is also opportunity." 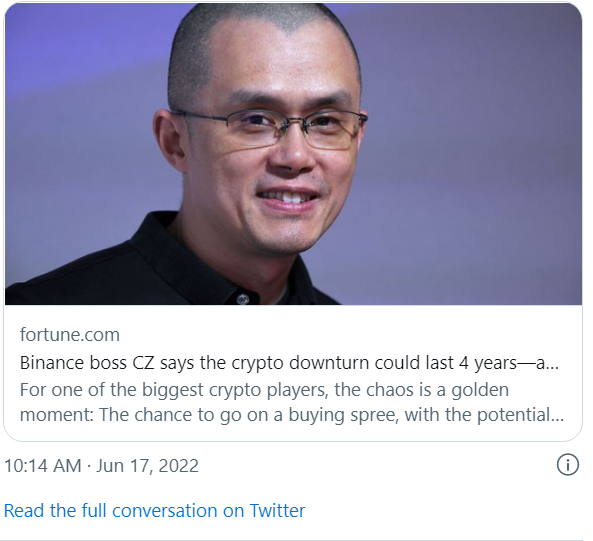 According to insiders, Binance was estimated to be worth about $300 million, but the company does not disclose its figures. This valuation puts Binance as one of the most valuable private businesses in the world, and their CEO, which controls the largest stake, is worth as much as $73 billion. This valuation at the time was "fictitious pricing," CZ told Fortune in an interview.

"We do not need to raise money," CZ said in an interview at Viva Technology, an expo in Paris. "Based on my knowledge, we have a much larger budget than anybody else in the industry." This demonstrates the robust financial position of Binance. "Although it is painful for a lot of people, it weeds out the weak projects, and only the strong ones stay," he said. "Everyone who lasts, who survives, will be stronger."

Binance has also committed to investing $500 million toward Elon Musk’s planned purchase of Twitter. This is something CZ says he and Musk briefly discussed through texts. While this deal is still in question, CZ believes Twitter could potentially be a very profitable investment for Binance. “It is probably the most important free speech platform we have today,” he says. “I use Twitter way more than I use Binance.” 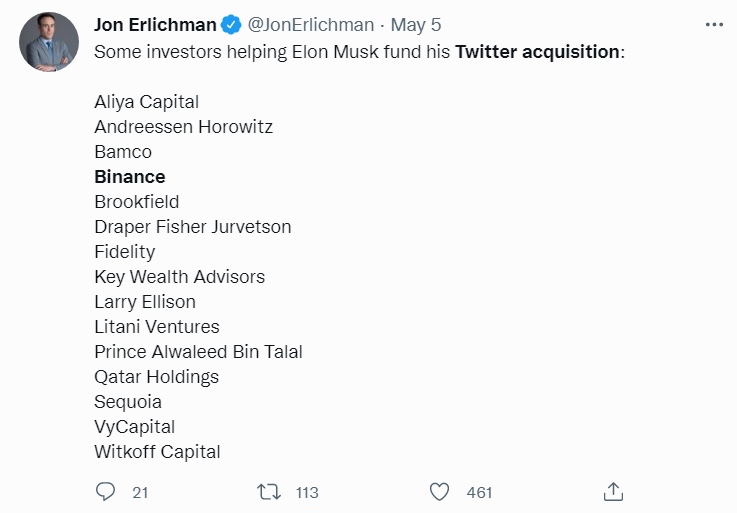 Expansion appears to be a similar story for Huobi, another Chinese exchange. They recently announced an investment in Cube, a public chain that creates new infrastructure for Web 3.0 and the metaverse, according to an interview with Lily Zhang, CFO of Huobi Globa.

Zhang continued, "Huobi Global has picked Cube as one of the public chains we will invest in under our Web 3.0 development strategy. In the near future, we will continue to invest in more public chains as we are optimistic about Web 3.0 and are committed to improving its infrastructure."

Huobi also recently announced the purchase of Bitex, one of the first regional cryptocurrency exchanges in Latin America. Latin America sees between 8% and 10% of global cryptocurrency activity, and the continent saw the use of cryptocurrencies rise by 1,370% over the last two years. Venezuela and Argentina ranked seventh and tenth in the 2021 Global Crypto Adoption Index published by Chainalysis, showing that Huobi's acquisition is big news for their world reach.

Huobi and Binance seem to be acting in stark contrast to their non-Chinese competition. Singapore's Crypto.com will cut almost 5% of its workforce or about 260 employees, CEO Kris Marszalek Tweeted just over a week ago. 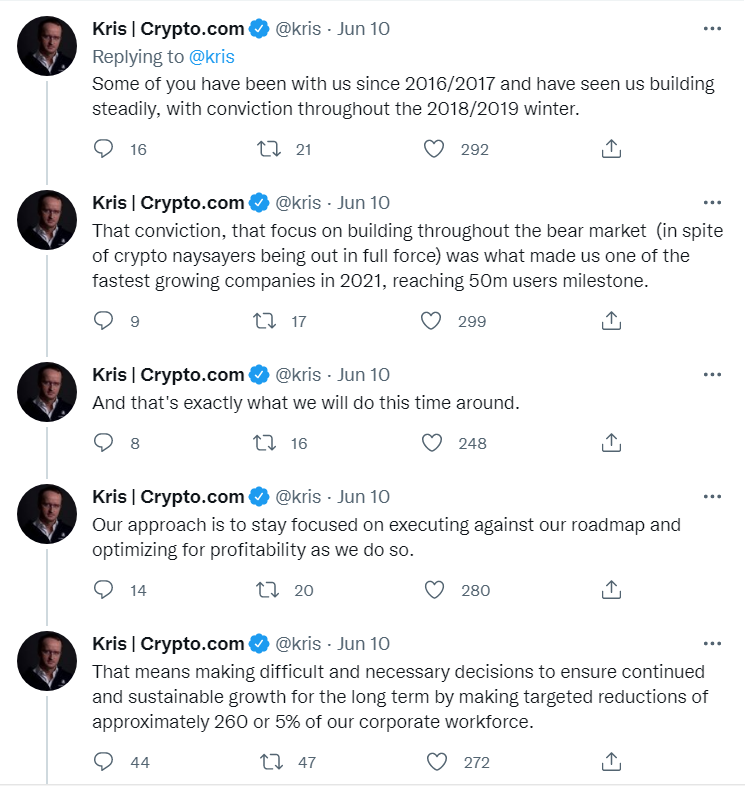 Crypto.com's counterparts in the west have not faired much better. The Winklevoss Twin's Gemini announced they are laying off 10% of their staff, citing 'crypto winter.' They described the current market as a "contraction phase that is settling into a period of stasis." A supplier intelligence company Craft says Gemini has around 1,000 employees, so it is safe to assume 100 crypto industry workers will be without a job.

Coinbase, the largest publicly traded U.S crypto exchange, reiterated that it would be extending its previously announced hiring pause and even rescinding accepted job offers as part of cost-cutting maneuvers amid harsh market conditions, according to a Coindesk article.

New Jersey's Block has appeared to have gotten hit the hardest, with Chief Executive Officer, Zac Prince, stating that "about 20 percent" of its workforce will be let go. This is equivalent to approximately 170 workers. 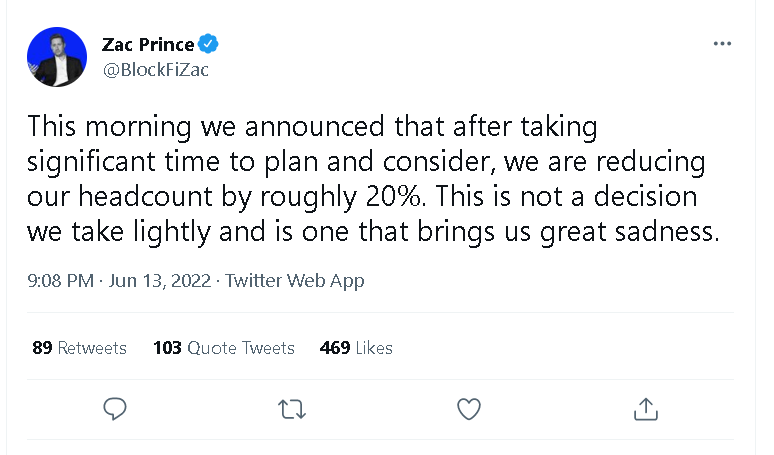 It is interesting how Bitcoin's decline over the past 13 weeks has affected some companies versus others. The Chinese firms appear to be in an ideal long-term position, being able to expand while there is blood in the water, as opposed to shrinking. It is up to speculation as to what has caused this phenomnon, but what is known is this should significantly affect who has the best growth opportunity through the next bull run.