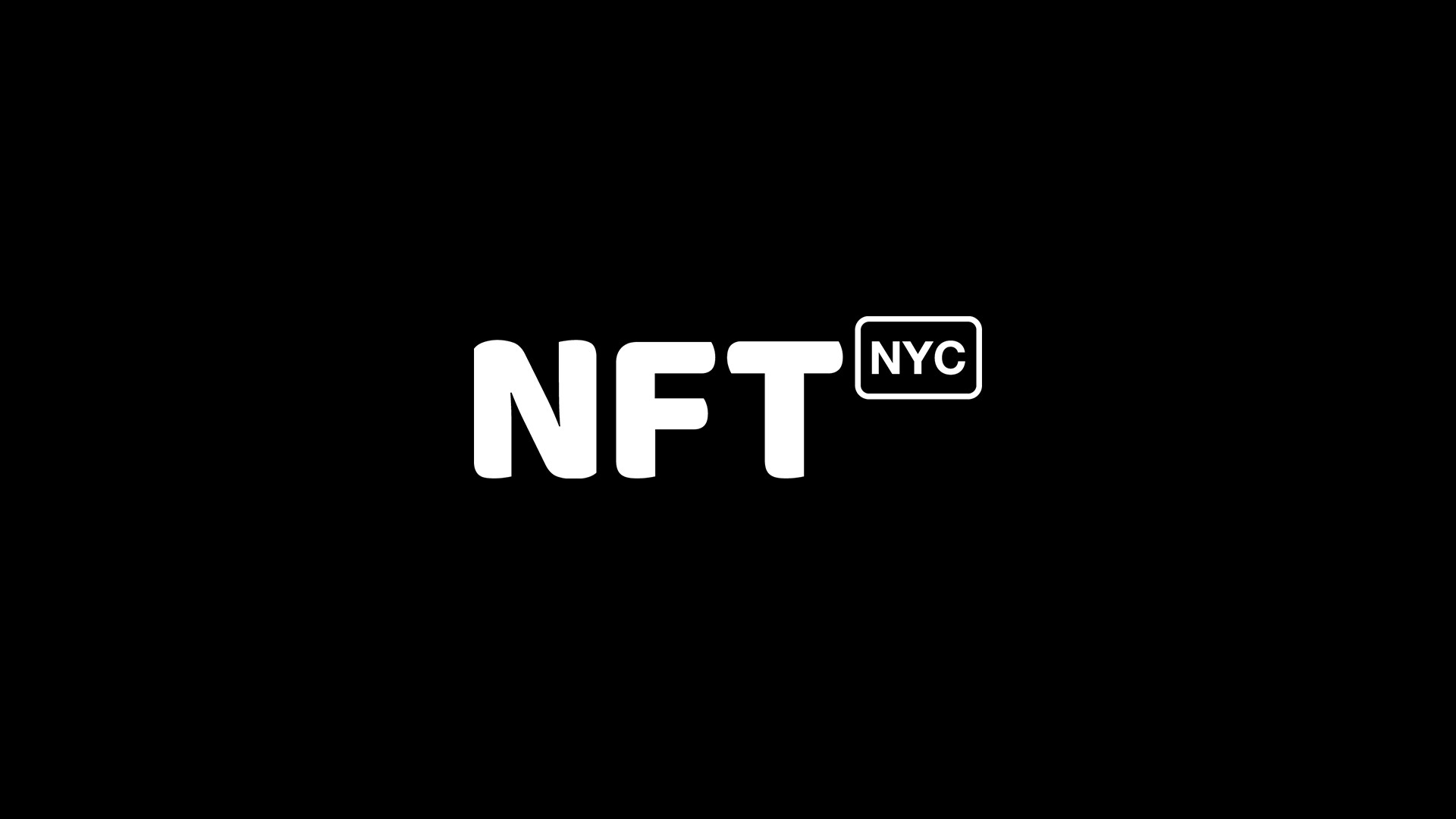 NFT NYC vs Consensus: A Comparison

Summary: In back-to-back weeks, two of the biggest cryptocurrency-related conferences have taken place: Consensus in Austin, Texas, and NFT NYC in New York City. The conferences were wildly different from one another and catered to their target audience. Let’s look at some of the ways these two conferences were similar and different and which one investors ...

In back-to-back weeks, two of the biggest cryptocurrency-related conferences have taken place: Consensus in Austin, Texas, and NFT NYC in New York City. The conferences were wildly different from one another and catered to their target audience. Let’s look at some of the ways these two conferences were similar and different and which one investors should attend next year.

Consensus 2022 was the eighth iteration of the conference, making it one of the oldest crypto conferences in the industry. It was hosted and created by CoinDesk and boasts some of the top names in blockchain as speakers, including Cardano founder Charles Hoskinson, FTX founder Sam Bankman-Fried, and Kimbal Musk, Elon Musk’s brother. The majority of the event was held in the Austin Convention Center, and there were both main stages as well as hundreds of booths and demos from top cryptocurrency projects. Around Austin, there were satellite venues that included a basketball court, an NFT gallery, and the DAOhouse. The presentations were incredibly engaging and touched on a lot of the most important topics in the cryptocurrency industry, like regulations, Ethereum’s merge, and future use cases for blockchain.

Even though NFT NYC boasted 1,500 speakers, many within the community criticized their so-called “expert” status. Some speakers have also spoken out against the event organizers and their lack of professionalism and responsiveness. Additionally, according to some event-goers on Twitter and those I met at the networking events, the security at the event was nonexistent and anyone could have walked into the speaker events without a ticket. Even with this generous attendance policy, photos have surfaced of completely empty speaker events. 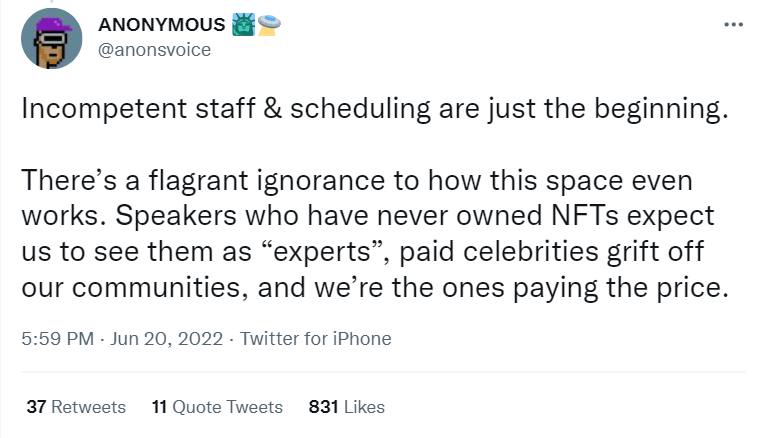 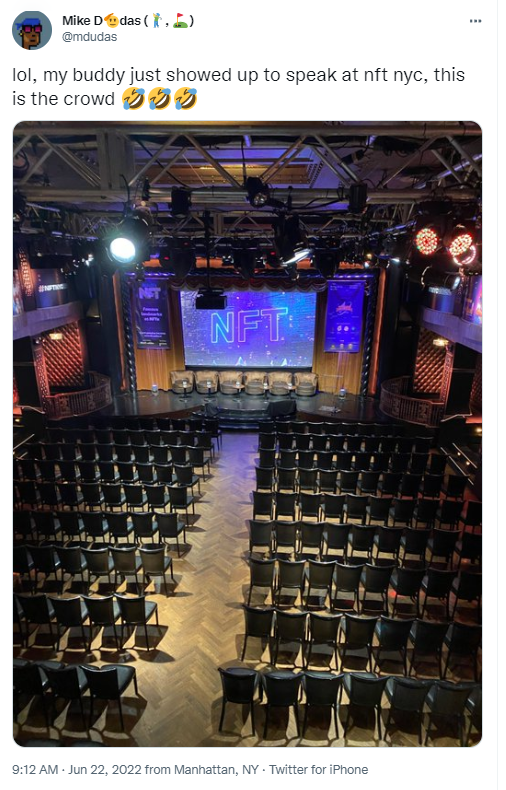 At any crypto conference, networking events and after-parties are the attendants’ favorite activities, as they are an opportunity to get free merchandise and food and network with some of the top minds in the space. At Consensus, there were hundreds of events and almost all of them were open entrance to anyone who signed up. Top projects like Polygon, Chainlink, Binance, and Osmosis rented AirBNB mansions or venues for the night and had top talents like DJs, magicians, and acrobats.

While NFT NYC had hundreds of events spread throughout Manhattan, a lot were invite-only and exclusive to members of a DAO or holders of a certain NFT. One of the biggest satellite events, which arguably acted like a completely separate event to NFT NYC, was ApeFest, an event exclusive for holders of Bored Ape Yacht Club NFTs. From my experience, the events and afterparties of NFT NYC paled in comparison to the size of the events at Consensus, but that could be due to the limitations of available venues in a city like New York. They also had no reason to let in guests who were not a part of their community, as the structure of NFT NYC felt more like a meetup of online friends than a professional conference. This event did seem to take over the city in a more significant way than Austin, as there were ads all over Time Square for NFT projects and collections. 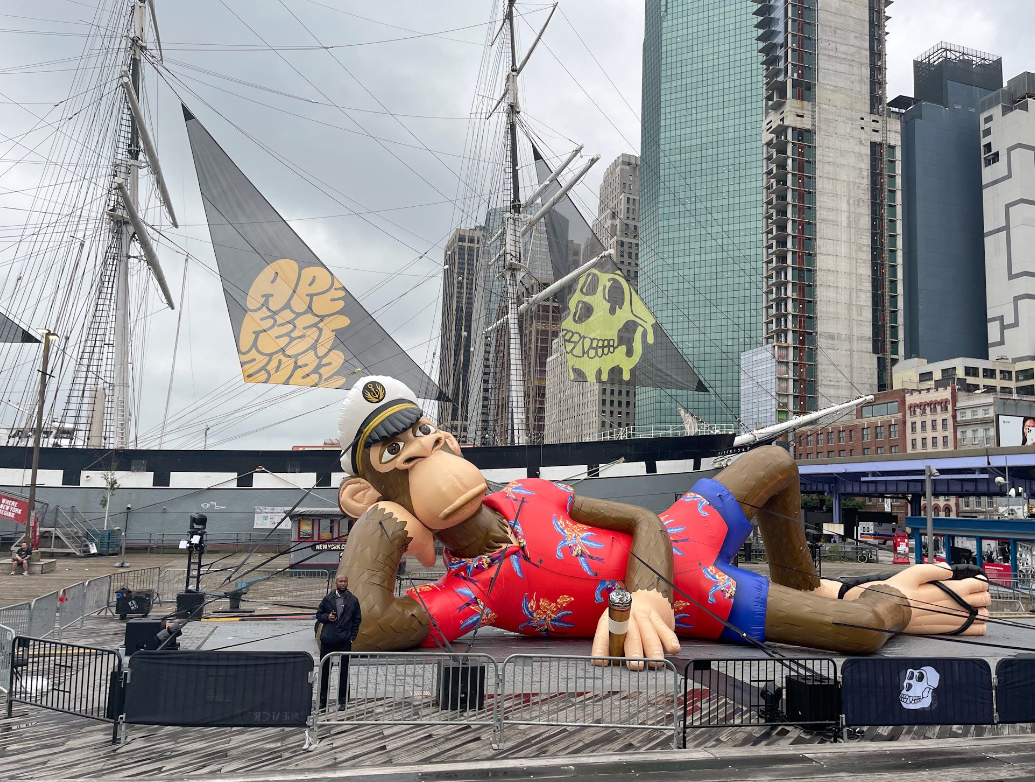 Overall, there seemed to be a large difference in the professionalism of attendees at Consensus and NFT NYC. At Consensus, there were lots of builders, founders, analysts, and people representing reputable financial firms and tech companies. NFT NYC consisted more of holders of NFTs and founders of startup companies. At Consensus, lively conversations could be had about all things related to blockchain and the future of Web3. At NFT NYC, many networking conversations dealt more with which NFT projects people expected would explode in popularity next and how they were convinced that their NFT would make them millionaires.

These two conferences were geared toward drastically different audiences within the cryptocurrency space. For those wanting a more professional-oriented experience where they can network with future leaders in the cryptocurrency space, Consensus is the objectively better conference. Additionally, Consensus’ speakers and booths were intellectually stimulating and allowed conference-goers to leave with lots more knowledge about the industry. For those wanting an experience to meet some of the people they have only met on Discord servers and having fun with their NFT community, NFT NYC is the conference of choice. Though both are different and oriented towards different crowds, I found that Consensus offered a better experience for anyone interested in diving into the crypto and blockchain industry.