Summary: Do Kwon received an eerie message from Anonymous, a self-defined collaborative project with activists from different countries who seek a better future for humanity, in the form of a Youtube video on Sunday, which caused Do Kwon to trend on Twitter Monday morning.  The message let Do Kwon know that along with countless other governments, ...

Do Kwon received an eerie message from Anonymous, a self-defined collaborative project with activists from different countries who seek a better future for humanity, in the form of a Youtube video on Sunday, which caused Do Kwon to trend on Twitter Monday morning.

The message let Do Kwon know that along with countless other governments, Anonymous is also investigating his actions that led to millions of people losing money in his failed project. 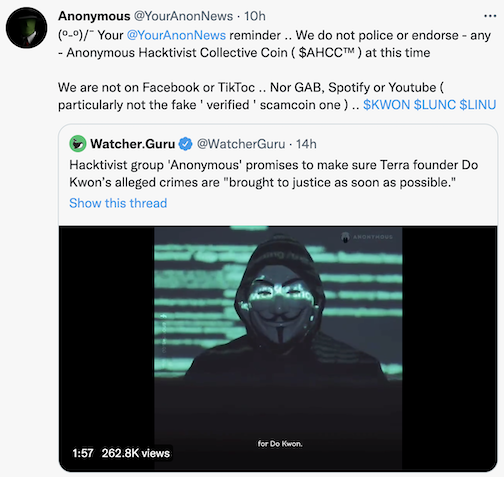 “The actions of Do Kwon, the founder of the Terra Luna ecosystem, is single-handedly responsible for scamming billions of dollars away from retail investors,” the Anonymous video said. “Do Kwon made a name for himself with his arrogant tactics, trolling competitors, critics and acting like he would never fail.”

Anonymous posted this video in response to the Terra Luna ecosystem’s massive collapse that saw their cryptocurrencies, formerly known as UST and LUNA, lose 99% of their value in the course of a week. While Anonymous noted that businesses and projects fail all the time, they were taken back by Kwon’s arrogance and previous comments alluding to this potential catastrophe that became a reality.

Anonymous showed Kwon’s interview where he said he wants to start at nothing, and after being a key project in the early vision of the decentralized blockchain go back to nothing.

“You begin from nothing and you go back to nothing,” Kwon said. “That’s exactly where I want to be.”

In addition, Anonymous pointed out that prior to Terra Luna, Kwon worked for another failed stablecoin project called “Basis Cash.” However, since he was operating under a false name Rick Sanchez.

Anonymous concluded their video saying, “At this point, the only thing we can do is hold you accountable and make sure you are brought to justice as soon as possible. We are Anonymous. We are Legion. Expect Us.”

The actions of Do Kwon and his failed project have caused a ripple effect in the crypto market that has now seen hedge fund Three Arrows Capital (3AC) experience insolvency, after being exposed to LUNA. While co-founder Kyle Davies noted they were able to handle the losses from LUNA, it was the ensuing market dump that caused them serious problems.

The ripple didn’t stop there. Countless other firms came out and said they were exposed to 3AC, causing them to experience their own challenges in the market. Now some companies are getting bailed out by other companies, while the weak ones with poor ideas and execution are being cast out from the market.

However, regulators speaking in Zurich last week noted that the recent events in the crypto market are not necessarily a bad thing and that they could set the foundation for a stronger industry going forward.

At the time being, a lot still remains unknown in the crypto sphere. With regulations pending, coins dumping and firms experiencing insolvency, some experts predict it could be months before the industry starts to see a turn around.