MicroStrategy Invests Another $10M in Bitcoin, Mixed Response from the Crypto Community

Summary: Michael Saylor announced MicroStrategy has purchased an additional 480 Bitcoins for roughly $10 million at an average price of $20,817 per coin, via a tweet on Wednesday.  According to the MicroStrategy CEO in Saylor, the business intelligence software company has accumulated 129,699 Bitcoins, valued at about $3.98 billion. They were purchased for an average price ...

Michael Saylor announced MicroStrategy has purchased an additional 480 Bitcoins for roughly $10 million at an average price of $20,817 per coin, via a tweet on Wednesday. 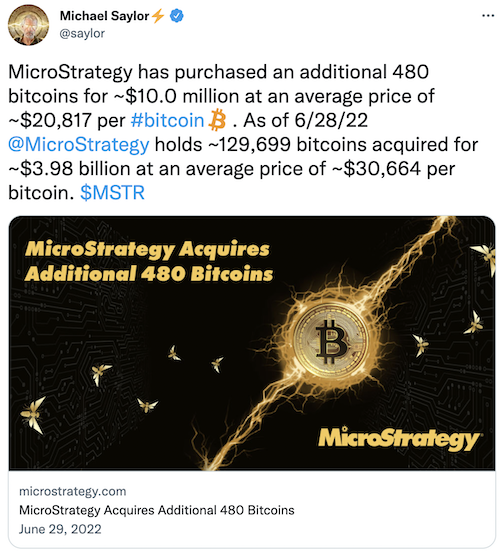 According to the MicroStrategy CEO in Saylor, the business intelligence software company has accumulated 129,699 Bitcoins, valued at about $3.98 billion. They were purchased for an average price of $30,664 per Bitcoin.

Bitcoin Enthusiasts are rallying around Saylor’s tweet, expressing they remain bullish on the digital currency, despite the recent market crash. Some of these pundits include Twitter personalities Max Keiser, James Lavish and Crypto Rover.

Crypto Rover warns investors to play the long game when investing in crypto. He provided a unique graph that shows Bitcoin’s exponential growth and the possibility of the digital asset hitting $1,000,000 by 2030. Here are several tweets from Crypto Rover. 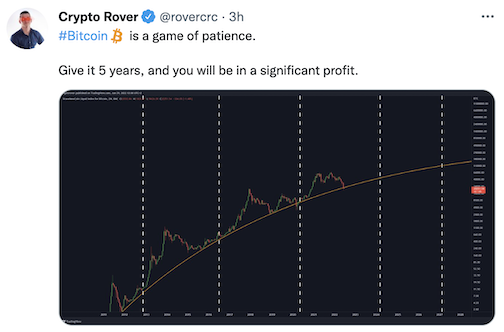 James Lavish also issued a warning to the Bitcoin and crypto community tweeting, “When the #Bitcoin panic subsides and the price rips back above $50K, the same people who are waiting to buy sub-$9K will be the ones buying with abandon and driving the price to a new ATH.”

Despite enthusiasm from several different sources, the overall public according to the Fear & Greed Index for the crypto market remains at “extreme fear,” with a number of 13. That 13 is worse than yesterday’s 10 and last week’s 11.

The fears are warranted, as the crypto market has been experiencing extreme turbulence over the last few months, which started with the Terra Luna network’s crash, which sent their two cryptocurrencies, UST and LUNA, to virtually zero over the course of a week.

Since then, Three Arrows Capital has experienced insolvency, with a British Virgin Islands court ordering the hedge fund to liquidate. In addition, other companies like Celsius, Babel and Voyager are experiencing the ramifications of a difficult market.

The crypto market has mirrored the traditional market, which has also been navigating arduous circumstances, inflation and overall market volatility. Federal Reserve Chairman Jerome Powell came out Wednesday saying that he expects inflation to continue and we may even see a new and evolved economy form post pandemic and amid Russia’s invasion on Ukraine.

While Powell doesn’t know with absolute certainty, he is questioning whether the economy and inflation will be able to return to post-pandemic numbers or new dynamics in the market will materialize. In an effort to combat inflation, the Fed has hiked the federal-funds rate to about 1.5-1.75%, with plans to further increase this number at their July meeting. Powell recently stated he believes the U.S. economy can handle a tiger monetary policy.